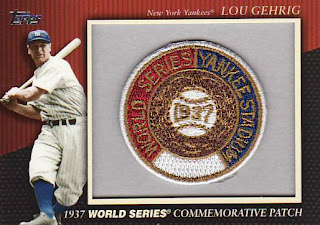 Depending on what school of thought you subscribe to, these commemorative patches are the best thing since sliced bread, the worst thing since Hitler or so completely indifferent that you are barely aware of their existence.

Me? I'm pretty indifferent to them. I think the idea behind them is pretty cool. A specially manufactured patch commemorative a certain event, embedded into a baseball card with a small picture of someone from that specific event who did something cool. The idea is pretty solid.

The reality of these patches is that you will more than likely pay a premium on the secondary market for something that wasn't from the era of the specific event. That's not so hot.

For instance, this commemorative patch card sold for as much as the blaster that it was found in cost. What's so special about a patch recently made to commemorate an event? There are patches commemorating an event featuring the likes of Ryan Zimmerman and Mark Teixeira, but I'll bet that they won't pay for the price of the blaster.

If a 1937 World Series era patch was featured in this card, I could see this selling for an astronomical price. Alas, the patch is most likely vintage 2009.

Maybe someday, I will understand the allure of manufactured patch cards. Sure, the one I have in my collection is pretty cool. It's a Carlton Fisk manufactured patch card featuring a silhouette of the "wave" from the 1975 World Series. Part of what makes the Fisk card so cool was the low price that accompanied the card. $5.00.
Posted by Steve Gierman at 5:50 PM 3 comments: