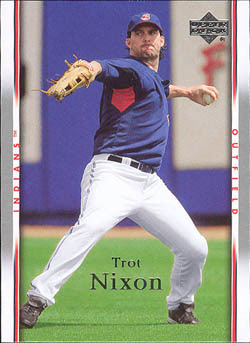 Quite a few baseball cards depict players in spring training. This is for two reasons: First,

it is easier for photographers to get close to the players when they are playing meaningless games than when they are, and also to get shots of players in new uniforms (See 2008 Tampa Bay Rays Upper Deck cards) or posed shots for various sets. The alternative for this second reason is airbrushing, which is a whole 'nother story.

Along with this rather random Trot Nixon card, here is an interesting poem I came across that seemed appropriate for today.

William Carlos Williams, "At the Ball Game" (from Spring and All)

At the Ball Game


The crowd at the ball game
is moved uniformly

by a spirit of uselessness
which delights them--

all the exciting detail
of the chase

and the escape, the error
the flash of genius--

all to no end save beauty
the eternal--

So in detail they, the crowd,
are beautiful

for this
to be warned against

saluted and defied--
It is alive, venomous

it smiles grimly
its words cut--

The flashy female with her
mother, gets it--

The Jew gets it straight--it
is deadly, terrifying--

It is the Inquisition, the
Revolution

It is beauty itself
that lives

day by day in them
idly--

This is
the power of their faces

It is summer, it is the solstice
the crowd is

cheering, the crowd is laughing
in detail

We're underway with the 2012 baseball season everyone! Go Braves!
Posted by Chunter at 3:07 PM No comments:

A Quandary, A Dilemma, A Bind

I was going through some junk wax today and saw some old acquaintaces, some 2010 Topps Million Card Giveaway cards.This was before I was as connected with bloggers who use these codes, as I am now, and sadly these cards were useless to me or anyone else and then expired. Surely they have some purpose? 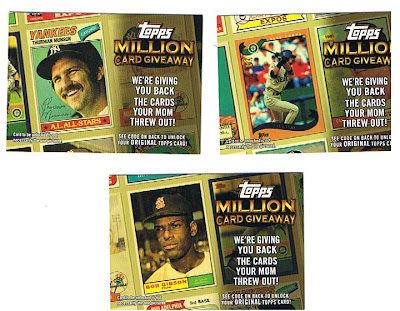 Hmmm...Let's experiment with this here card. This is a 2010 MCG card of Ichiro Suzuki. Incidentally, my good friend Wikipedia tells me that Ichiro's manager in 1994 was the one who convinced him to put "Ichiro" of the back of his jersey, instead of "Suzuki." Apparently it was part of some marketing deal. I dunno, it kind of annoys me that on all his cards he is referred to as "Ichiro." I mean, Albert Pujols has both names on his card. Should he have just his last name on there (or first?) Hm. (Does Ron Artest have "Metta World Peace on his basketball cards? By the way, I always read "Metta World Peace" with a deep voice.) 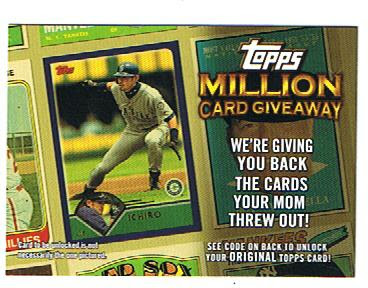 Using the awesome power of my (other) good friend scissors, I lopped and cropped Ichiro out of his tilted posture to this: 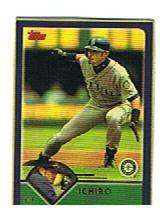 I know what you're thinking-I lopped the bottom part off. I didn't; it just scanned funny. It actually has "ked is not" slanted across the bottom, which is awesome.

In conclusion, I really don't know what to do with these. Still. What I'll probably end up doing with them is using them for 'dummy' support cards in trade packages...or something. I'll try to avoid cutting them up anymore. No promises though.