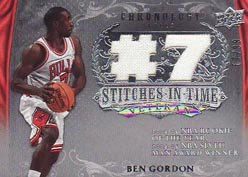 In the grand scheme of things, baseball is my favorite sport of the big four in the United States. Basketball is a distant second, followed closely by football in third. Hockey is in last place. Although, I'll admit, I've watched more hockey games this past season than any other time in my life. That probably has something to do with the Blackhawks finally televising home games.

When it comes to collecting, I just stick to baseball. I do look around for interesting cards in other sports. Mostly, this is for trading and my eBay store. This Ben Gordon card will probably end up in my store, but it will still be a small struggle to keep this out of my collection.

I'm a Bulls fan and Ben Gordon was the start of playoff basketball in Chicago, after a long drought. If I keep it, I will be going down a collecting path that I don't want to get into; basketball cards.

2004-05 NBA Sixth Man Award Winner is also listed among his achievements of the front of the card. That one is correct. Ben did make the 2004-05 NBA All-Rookie First Team, but that's not mentioned anywhere on the card. Maybe that's what Upper Deck meant to list on the front. That's a pretty big mistake though. I wonder what Emeka Okafor or Ben Gordon would have to say about this card if they ever saw the final product.

Despite that major error, the card is limited to 99. I guess that if you are going to commit an obvious error, it's best to limit the number of cards with that error. Not that it justifies the mistake or makes it any better.

Even the back of the card is a bit confusing.

You have received a Ben Gordon Game-Used trading card. On the front of this card is a piece of memorabilia that has been certified to us as having been used in an NBA game. We hope you enjoy this piece of basketball history, as we continue to keep you as close as you can get!

According to the text on the back, this is a Ben Gordon Game-Used trading card. Also according to the text, this piece of memorabilia just been certified to having been used in an NBA game. Nowhere in that part of the text does it specify Ben Gordon as being the person using this Game-Used memorabilia. This could have been worn by Benny the Bull on the sidelines during the game. I have no idea.

I could take it on faith that this was used in a game by Ben Gordon, but the text on the front of the card says that Gordon was Rookie of the Year. Can I assume one thing, while having a glaring error smack me in the head on another part of the card? Sigh. It's all in the wording, I suppose.

Still, it looks like a nice card until you really start scrutinizing it.
Posted by Steve Gierman at 4:46 PM No comments: 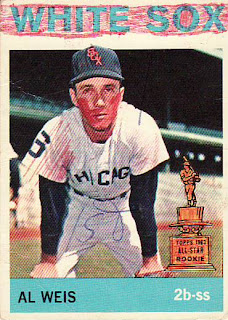 I would love to peek inside of the mind of a child. It should be filled with fantastical ideas and wonderment. I'll bet that all the world's problems could be solved by looking at everything through a child's eyes. Only then, might I be able to appreciate the added artistry of this card to its full potential.

If an adult did this butchery, I would think that they were either, drunk, high, Forrest Gump or extremely bored and distracted. What did poor Al Weis ever do to the person responsible for this masterpiece?

As you can tell by the scan, someone really loves the red pen. The words "White Sox" are helped along by a red ink stripe that isn't quite level. The "Sox" logo on the hat is filled in with red ink. The Topps 1963 All-Star Rookie trophy has changed from a yellow to a somewhat carefully lined red ink.

Al's eyes are mostly reddened and he's sporting a wonderful loopy red five o'clock shadow. He almost looks like the caricature of an old timey robber. Completing this outfit are streaks of red on each sleeve. The right side of Al gets the broad strokes of red ink, while the left side seems to suffer from a smudgy transfer.

Tiny red dots make an appearance just below the H in White Sox, under the newly red banner. There appears to be red across the field behind Al, but that is not red ink, that is actually part of the picture. The dirt between the field and the stands just shows up in a reddish hue.

Lest red be the color of choice here, blue ink makes a subtle appearance. There is a mostly vertical straight line coming down onto Al's left shoulder. Curiously, the puzzling part of the blue ink comes just underneath Al's belt line. Can this be a clue into the mind of the inking artist?

It looks like "ISJ" written in blue ink over Al Weis' lap. What does it all mean? One can only speculate the meaning of this. Perhaps this was the artist's initials? Maybe it is a crudely written infinity sign. Could Al Weis be infinity? Since Al was on the White Sox and the 1969 Mets team, could this be a Cubs fan's revenge on Al?

We may never know the answers to this doctored card, but we can appreciate this as an interesting artifact from (hopefully) a child's mind.
Posted by Steve Gierman at 6:08 PM 2 comments: