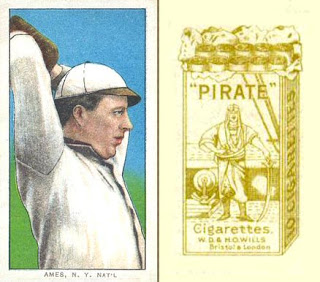 This is one of the rarest examples of a tobacco card. These cards were only issued to American and British military personnel in the South Pacific during 1912. The chances of these cards being stowed away for the trip back home are almost non-existent. Most that were stationed in the South Pacific at that time were merely looking for a smoke break and not a baseball card.

There are 97 cards in the set, but no one is known to have a complete set. The closest was a 96 card set that sold for nearly one million dollars, including the auction fees. The only card missing was Danny Murphy. This set is so rare that in many instances each card only has one known copy.

For those of you with American or British relatives that were stationed in the South Pacific in 1912, check out the items in their estate. If you find a cigarette pack that looks like this, you might have a slim chance of finding a rare card! 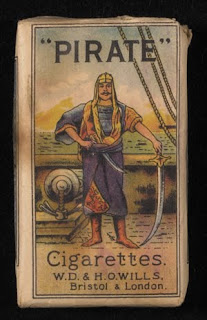 The cards are in a similar vein as the Red Cross backed cards, also considered a T215 set. The main difference being the large illustration of the Pirate cigarette pack on the back of the card. If you are fortunate enough to run across one of these cards, consider yourself extremely lucky.
Posted by Steve Gierman at 4:41 AM 4 comments: