Went to my (relatively) local card shop a day or two ago, Champ Sportscards in Huntsville, Alabama. The store was great, and the shop owner, Brooks, was friendly as I asked him some general questions about his shop and business.


One of the things I thought was awesome about the store was that there was a box full of 1961 Topps and 1962 Post (previously reviewed here). The 1962 Post set was really cool to me, especially. Ended up with these two cards from that box that included Orlando Cepeda and Maury Wills... 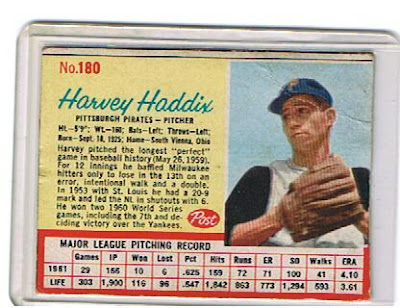 Harvey Haddix card. If you're a real baseball fan, you know his story. (I actually managed to squeeze this card into a penny sleeve, not so with this next card.) 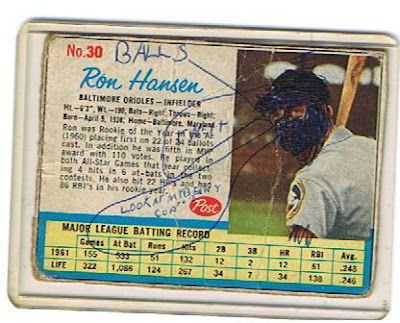 As soon as I saw this one, I had to have it, forgoing the one with a Giants player with a rip across his face. The (hopefully) kid that did this back in 1962 gave Ron Hansen a ski-mask-looking thing over his face, and a "beany." Ron is exhorting us to look at his "cop." I assume that by "BALLS" the kid was referring to Hansen's eyeballs. That's just a guess, though. [the middle bubble reads, "Tweet," referring to Hansen's status as an Oriole] The corners are horrendously worn, making my efforts to put this in a penny sleeve hopeless. The card is also heavily creased, as you may be able to tell.

However, this was a terrific card, and the Haddix balanced out the eccentricity of my purchase. The total price for both these?

Three dollars. (By the way, I also snagged a Curt Schilling Donruss RC, Brandon Hicks 2010 Chrome RC, a Glavine, and a Cardinal-jerseyed Smoltz for $2. Total.)

I love this hobby.

May it first be noted that this, being the fifth post of 2012 on TDTC, marks the passage of lasts year's post mark of four! Progress! 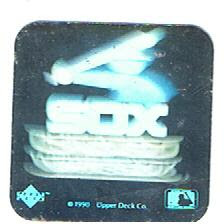 Here, now is Upper Deck's 22 year old foray into team stickers. Shiinneee...These actually scanned surprisingly well, considering how hard it is to see them. Best I can tell, these were inserted one per pack of 1990 Upper Deck. 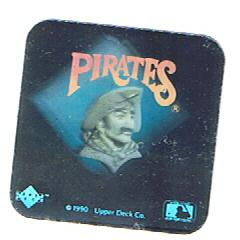 A Pirates sticker here-Each sticker is a little bit like "A history of MLB logos". Pirates fans, did that particular scalawag have any sort of nickname/existence as a team mascot? Jess wonderin'... 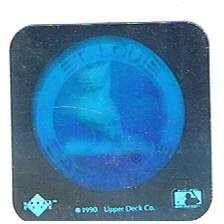 St. Louis Cardinals sticker. The back of the sticker is a blank white back. Yawn...I actually have a nice stack of these hologram stickers-maybe I could use them as trade package throw-ins. Unfortunately I do not have the Braves version of this sticker-anyone care to help me out there? 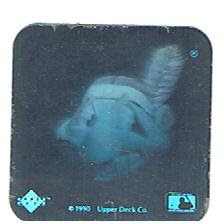 This card is sorta creepy. Apparently Chief Wahoo has gone...3-D! Considering this was 1990, this is like, bangin', cutting-edge technology! Amazing! (Looking back, Mr. Cardinal seems to have this 3-D form too. Cool, I guess. (Picture 1990 kid pulling Mr. Wahoo here: "Buzz Hype, yo! Man, that is clean!!!") 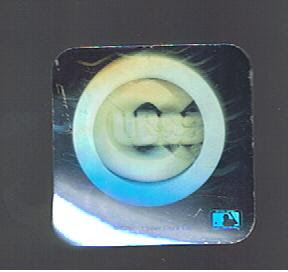 Last, I post a Cubs card. I posted this mostly because I have like 5 of them I don't really care for. (Picture afore-mentioned 1990 kid: "I have like, five of these Cubs hologrammies. Buzz kill, man!)Any diehard Cubs fans want these? (I know you're out there.)

So there you have it. 1990 Upper Deck hologram stickers! I frankly have no idea what a kid in 1990 would have done with these. They're not by any means something you stick on your car bumper (though that would look awesome to have the entire back of your car a giant hologram, ...right?) They're just...shiny. Huh. Well, anyway, 1990 UD holograms, everybody! (Let's bounce on outta heah, ya'll!)