In 1982, Topps teamed up with Squirt to create a scratch off game where people could win $1000 in groceries, plus get a collectible trading card to boot! The game pieces had a circle that could be punched out in the top section, then those placed on the necks of Squirt bottles. Somehow, the one I ended up with is not punched!

The cards feature the trademark yellow and green of the Squirt bottle's colors. For those that have never heard of Squirt, it was kinda like Mt. Dew, but not. Do they even make Squirt anymore? I have no idea. The entire piece is about 9 inches long and about 2.5 inches wide. The card itself is standard width, but about a half-inch or so short of a standard-sized card. The stock is about half the thickness of a regular card. A quick search on eBay revealed that another variety of these features two players instead of a player and game card. 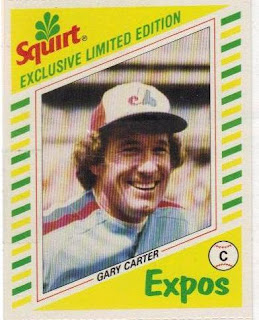 And, I scanned the back of the card so you can see what it looks like as well: 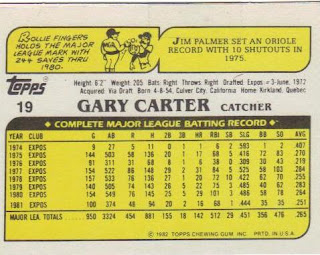 As you can see, Topps may have come up with an original design for the front, but the back is all '82 Topps. In fact, if I were a betting man, I'd bet it is the back of his '82 Topps card. Although, the "Jim Palmer" fact on the right at the top looks way too typewritten to have been on the real card. I could be wrong. I don't have an '82 Carter to compare this with.

As mentioned before, Carter is #19 of 22 cards. Here is the whole checklist:

It amazes me that no one (including myself) has posted about these little gems on here yet! So, I will take the lead (much like the first lemming over the cliff has to go some time): 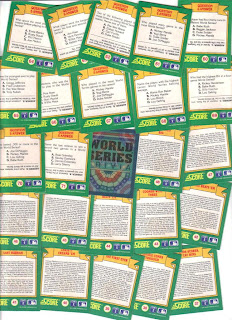 Pictured above is one scanner bed full of these minis. The full set takes multiple scans.

There are 72 cards in the set. These were special cards that were included in the factory boxes. Collectors would also find one motion card per pack off the shelf. Each card measures 2" x 2.5" in size.

The front of the card is a 'motion' (like Sportflics) that would change from "World Series Trivia" or "World Series Q&A" to the year the card focuses on (in this case, 1932): 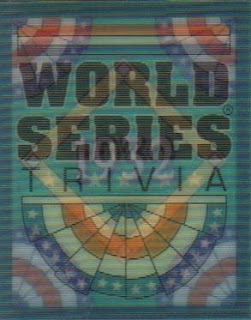 On the back, the collector finds either a tidbit of trivia (on the "Trivia" cards or a question to be answered (on the "Q&A" cards): 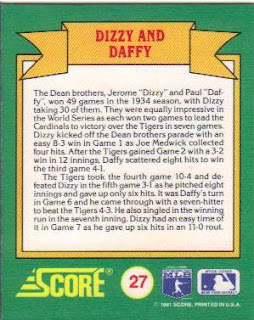 If you were to ask anyone that either collected these in the 90's or has since discovered them and held them in their collection for any length of time, the first thing that likely comes to mind is the fact that these little cards are stiff as boards and bend like nobody's business.

Over time, for whatever reason, the 'stuff' that binds everything together on these cards appears to shrink or tighten. The cards end up bowing in the middle and will not lay flat. In fact, to get the scans, I had to press down on the lid of my scanner. What a weird thing to happen, eh?
Posted by --David at 2:02 PM 5 comments:

Games in a Pack

Note: the bulk of this post is paraphrased from my post about the "Pirates" pack featured on "A Pack to be Named Later." I have added some thoughts and additional information for this blog. It's not exactly the same post! --David

Wiz Kids Games (an apparent subsidiary of Topps), provides many of the "game in a pack" fodder that one might encouter during a trip to one's favorite (or highly loathed, whichever) retailer.

These packs include everything needed for two people to play a game including punchout pieces which often require assembly by very nimble fingers, one or more dies, instructions, and other items that may or may not be needed for gameplay.

Some titles include: "Nascar Race Day," "Star Wars Pocket Model TCG," Pirates," and others. They also make the "Action Clix" games, but I have not bought any of those as of yet.

For the purposes of this post, as mentioned above, I will examining a pack of "Pirates" cards. I do have a "Nascar" pack that will appear at a later date on "A Pack to be Named Later" as well. 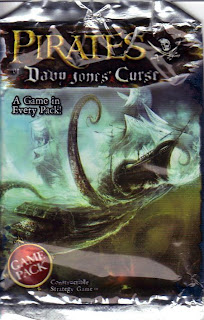 Each pack is a complete Pirates game (with two ships, a die, rules, etc). In order to really show these off, I scanned both sides of each playing card and then combined those into a "Side 1, Side 2" picture.

Each card is about the size of a regular/standard trading card, but is the thickness of a credit card. That's a good thing, because the assembly is a TINY feat, and anything thinner would tear like toilet paper.

First up, we have a "Firepot Specialist." The card comes with a punchout square 'special piece' and two punchout smoke-thingies:

Next, we have our first ship, Dark Fox, which bears something akin to an oldtime US Flag. Before you ask, YES, you have to punch out everything and assemble the ship. And, YES, after you punch out the pieces, they are TINY:

Here we have the booty: a series of coins (worth the amount printed on the back) plus a special coin to be used during gameplay (assuming you make it that far):

Next, is part two (because Blogger loads pictures in reverse order and I didn't realize this was #2 until writing this), of our second ship, Hangman's Joke. Why part TWO? Ah, you see, some ships are more complex and require two playing cards to complete. See? Aren't we having fun?

This is part one of the Hangman's Joke ship. The little brown wavy things are little flags that go on one of the masts. I assume they give you three because they know kids are going to lose these and come crying to their parents...

Assembling the ships not only requires you to punch them out of their cards, but to also be able to line up and insert tiny tabs into tiny slots (please reserve all crude comments for the tavern). Because these are pirate ships, they are also curved, making it that much more fun to assemble.

The little flags that hang off the back of each ship is very small, and will most likely be the first pieces lost after a few rounds of play.

Here is a special card, "Trogs." If you play this card, you get all the booty from a plundered ship. Very nice! I need to find some of these guys for a project I have around here...

And the last card in the pack is the island, because you can't have pirate treasure without an island to bury it on, right? Er, well, more accurately, to DIG IT UP from...

But, WAIT! There's more! In addition to the cards, each pack a set of "Quick Rules." These give you enough to play a scaled down game without concerning yourself with things like Trogs. 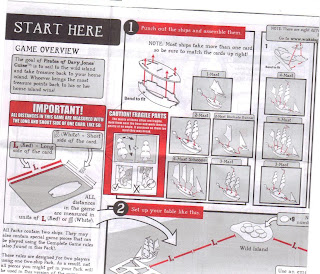 The Quick Rules provide a picture-based step-by-setp guide for assembling the ships and for playing a beginner's (or basic) game. It's pretty easy to follow.

Included in the pack is a mini-poster advertising the upcoming (back then) online PC game based on the cards (or vice versa, does it really matter?)... 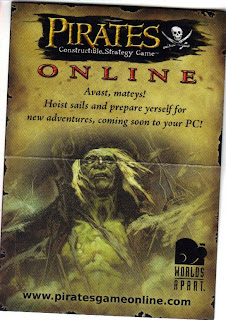 We also have a copy of the Full Rules for the Complete Game. I was tempted to open this thing up and show it to you, but if you really want to know that badly, go buy a 99-cent pack at your local Target. This game can get seriously complicated. I'm not sure how many kids will stick around for a full game... 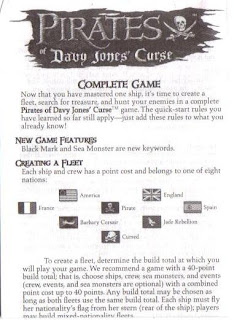 The full rules are much like reading a recipe in which you have an idea as to what you are making, but really, you've never heard the ingredients written out quite like this. A quick looksie, and this game is like "Axis and Allies" in a wax pack...

And here we have the die that comes with the game. I used the ubiquitous US Quarter for sizing reference. It is "Small... esS... emM... All... Small!" 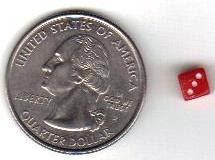 There is also a foldout checklist, in case anyone in their state of insanity wanted to collect every piece of the game. What you see here is page 1 of 4, and it is the size of a baseball card. 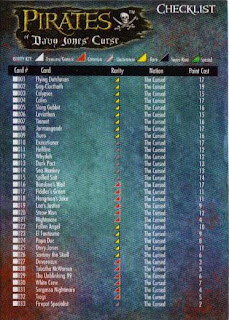 And, in the name of integrity, or something, I punched out and assembled the game pieces. There was no good way to get a picture, so I set up a mock game with the instruction books serving as backdrop... 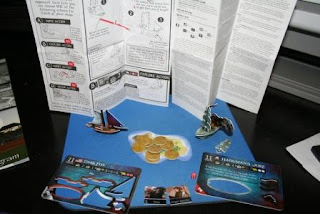 My sincerest condolances to any parent out there who had to endure putting these things together for their child. And if you bought these yourself, then you got what you deserved. In all honesty, though, the game DOES look kinda fun...
Posted by --David at 5:37 PM 3 comments: