I recently made a trip to my local card shop. The owners are nice enough to put up with my hours of searching for Bip Roberts, Don Mossi, Dick Pole, Pete LaCock, and Rowland Office cards. They also, on occasion, will set aside cards that they think I might appreciate.

They knocked it out of the park on my last visit. After searching through a box of '60s commons, in an attempt to fill out my Don Mossi collection, a stack of cards were set in front of me.

Quite possibly the most amazing stack of cards... EVER! 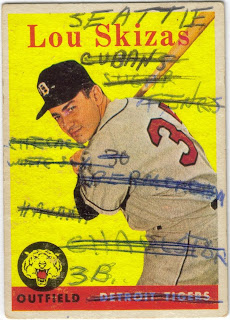 Thirty well-worn cards from 1958, and one from 1959 were in my hands. It was easy to see that the original owner genuinely cared for these players. Not the cards... but rather, the players on the cards. On each card, the owner carefully traced the progression of the player's career in ball-point pen. Most of the players on the cards are tracked through the 1961 season.
As you can see from the example above, this kid was pretty thorough. As you can see, Lou (The Nervous Greek) Skizas was picked up by the White Sox (in the 1958 Rule 5 draft), he then played for Bermingham (sic) and Charleston in '58. The tracking ends with Seattle (1959). At some point, he played a little third base.
Imagine how tough it was to follow all the transactions without the internet! I will forgive that the kid missed stops in Nashville, Macon, Indianapolis, Mexico City, and Denver. He did catch Havana, Cubans (couldn't find it on Baseball Reference), Sugar (Was it a lesser known nickname?), and I'm not quite sure what is written under "Sugar" (could it be an attempt at spelling "Rainiers"?)
Pretty impressive... 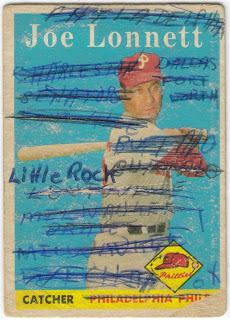 Joseph Paul Lonnett was signed by the Phillies in 1948. This card shows some of the places he hung his hat starting with the 1958 season. In the middle of the season, he was traded to the Milwaukee Braves. He didn't play for the Braves in '58, but did play for Wichita.
Then it gets CRAZY!
In May of 1959, he was traded by the Milwaukee Braves with Earl Hersh to the Detroit Tigers for Al Paschal (minors) and Charlie Lau. I'd have to do some more research to be sure why, but the players were all returned to original teams on THE SAME DAY! It seems Joe refused to report to his new team. (Did he kill the trade?)
That explains the MILWAUKEE BRAVE and MILWAUKEE.
In June of '59 the Phillies bought him back from the Braves. In '59 he played for the Phillies, Louisville, and Buffalo.
1960 brought him back to Philadelphia and Buffalo, so that explains the BUFFALO (x2).
DALLAS FORT WORTH, the SENATORS, CHARLESTON, and Little Rock can not be verified by Baseball Reference... BUT I'm gonna say that this kid knew something they don't.
I have 29 more gems like this that I will share between here and my blog over the next few weeks.
Posted by PunkRockPaint at 10:40 PM 7 comments:

Email ThisBlogThis!Share to TwitterShare to FacebookShare to Pinterest
Labels: Awesome Cards of Awesomeness

The Well Loved Card Was Almost Mine 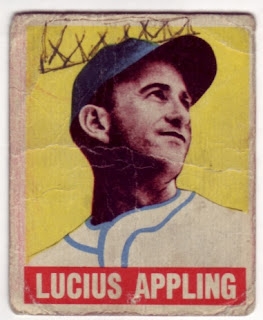 I don't own a 1948 Leaf card. Not yet, at least. The only card I have before 1950 is a 1933 World Wide Gum card of Ralph Kress. I spotted this beauty on eBay and put in a token bid. I half expected to be outbid for this card, but I had a sliver of hope that the appalling condition of the card may scare other prospective buyers off. This is nothing more than a filler card. But that filler card is a vintage Luke Appling.

The card has multiple creases, frayed edges, writing in two different colored inks... it was amazing. As outstanding as this card is, I wasn't going to pay more than a few bucks for it. There love for a well worn card and there's reality. For as much character as this card has, it's not worth getting into a bidding war.

If you squint closely at the card, you can see that someone filled in the left side of the card with red ink. I have taken it upon myself to deduce that the seven "X"s that line the top represent his seven All-Star appearances. Although, I could be reading more into it than was ever there to begin with.

Ah, but what would a colorful card front be without a back? A previous owner of this card came to the conclusion that Lucius (Luke) Appling was "good". That may be a bit of an understatement. 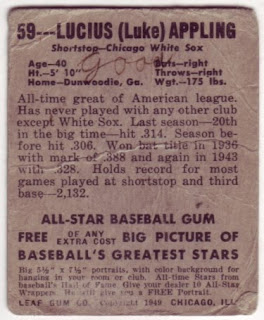 I tried, but I refuse to pay anything more than my maximum bid. Another card will come up. It always does.
Posted by Steve Gierman at 8:31 PM 3 comments: