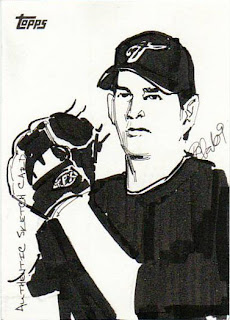 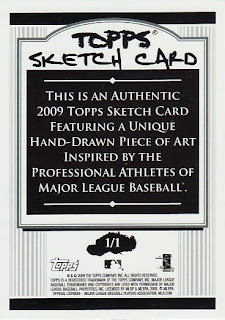 The idea of sketch cards are a wonderful idea. I'm always for art infiltrating the hobby. Good or bad, the final result is always up to the consumer. These cards have proven very popular with the collectors that have a background in fine arts. Those who don't appreciate the skill of an artist may have a harder time liking these.

The sketches are fine. I don't expect every drawing to look exactly like the player depicted. That's part of the fun of artwork. It allows you to peer into the mind of someone else and see the world through their eyes for a moment in time. No two people see the exact same things in any scenario. That's why a jury is made up of twelve people instead of just one person.

I bought this sketch card a while back. It was listed as Jason Frasor of the Toronto Blue Jays. It looked enough like Jason Frasor to have me believe it is him, so I put in a bid and ended up winning this 1 of 1 card for around $10.

I was a bit skeptical of Jason being portrayed on a sketch card. Middle relievers aren't usually the subject of special cards. It is Toronto, where people outside of Canada have a tough time knowing exactly who is on the Blue Jays team. Jason has been a part of the bullpen for several years. It made sense.

The back of the card doesn't list a name, which was worrisome. I went to Beckett.com to upload the image. I believe that there should be a picture of every card available to the public, so I try to contribute when I can.

There was a problem. I couldn't find a listing for Jason Frasor in this sketch set on Beckett's site. I'm used to not being able to find some cards when I search, only to find them later in a different search. I tried being less specific. Nothing. I tried just looking up Jason Frasor. This card was not among the list.

Finally, I looked up the checklist from the set. There were several Blue Jays listed. I could rule out all but one. Roy Halladay. Does this card look like Roy Halladay? I'm not so sure. Did an artist submit a sketch of Jason Frasor and Topps just decided that a Caucasian Toronto Blue Jays pitcher must be Roy Halladay?

The problem comes on the back of the card. There is absolutely nothing identifying the player as Roy Halladay or Jason Frasor or anyone else for that matter. I wouldn't expect the player's name to be on the front of a card like this. The sketch work is fine, but it's troubling that I would have to search to find out who this player is and still unsure after I see the answer.

Either way, I have a nice card on my hands. I'm just undecided as whether it will be a permanent part of my collection or not. Only time will tell.
Posted by Steve Gierman at 5:38 PM 7 comments: