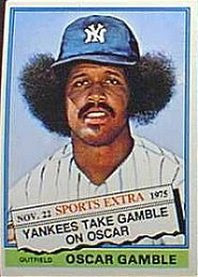 The hair! My God, the hair!

Oscar certainly wins the prize for largest major league afro in 1975. His airbrushed cap can barely hold on to Oscar's head. Does that hair come with it's own gravitational pull?

Oscar almost looks like he's getting a migraine from all that hair sitting on top of his head. I do believe that the Yankees had to take an insurance policy out on those locks. Maybe he secretly wanted to be a backup singer for the Commodores.

Oscar Gamble may have been the modern day equivalent of Samson. Once the hair was gone, so was Oscar's strength. His statistics seemed to mirror his afro length.

This has to be one of the most recognizable cards of the seventies. The sheer volume of the hair made it an instant favorite with kids and adults alike. It would take two different stints with the White Sox before I realized the existence of this card.

Now, like the Doobie Brothers episode of What's Happening, I must bow down to the awesomeness of this card. I wonder what would happen if a player came out with a card like this today? I doubt that a player would sport this kind of hairstyle today. The current philosophy seems to be either shaved or some hairdo worthy of the Predator. This is truly a snapshot of the mid-seventies.
Posted by Steve Gierman at 1:20 PM