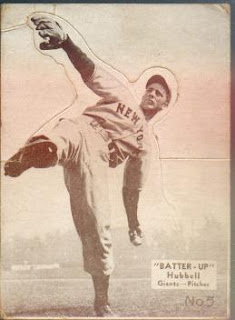 As you can see from the cut line, kids could fold back the top half of the card and pose them vertically. On this Batter-Up card, NY Giants legend Carl Hubbell demonstrates a Golden Age leg kick and delivery, his knuckles only a few inches clear of the mound. It's an excellent photo for the set concept and almost jumps off the card as-is.

Other die-cut set competitors, like the 1920s Major League die-cuts and (super-rare) 1934 R304s, used a one-size-fits-all-players die, but the Batter-Ups have a different silhouette for each card, an expensive process the producer hoped would stand out--or up--from the competition. (The fact they released the set over a three-year period probably reflects the costs involved.)

Our generation saw Donruss dip their toe in the water with some 1980s pop-up sets. Some years, they went out in wax packs with regular cards. Others saw them as oddly matched add-ons to their oversize Action All-Stars, arguably a gimmick themselves. Even though I keep the cards in pages like other sets, I like their physical 3-D nature and opportunity for interaction. As a kid, I arranged my cards around a diamond on the bedroom floor, the better for real-game imaginings. It would've been great to see more sets with classic players and nice composition like the Batter-Ups at the time. ("Hubbell kicks and fires! Joe Cronin swings and smokes a liner toward right field, but Gehringer reaches out to snare it! Whatta play!") I did have a Cronin card at the time--as a faceless disc in my Cadaco-Ellis All Star Baseball board game. Something that recaptured the look of the 40s or 50s era would've been cool. (OK, ASB was cool. I propose my idea as cooler.)

The Batter-Ups aren't an easy set to complete these days, both for availability and expense. At 192 cards, it's nearly the size of Goudey's signature 1933 set and produced in considerably smaller numbers. You'll spend a lot of time and money trying for all the Hall-of-Famers and high numbers. (On the plus side, no pesky Ruth or Gehrig!)

Commons missing the "stand" outline typically go for less than $10. This Hubbell, creased, digned, but otherwise intact, cost about $50. If you like the cards and are on a budget, I recommend looking for cool poses in low grades and high-contrast colors. (They printed the set in several shades and the "warm" colors look muddier than sepia or gray.) Blank backs also mean you can mount or display the cards without missing out on stats or stories. As the 1934 All-Star Game starter, ol' Carl could even be the centerpiece for a 9-man National League lineup...
Posted by Spike Glidden at 12:17 PM

I agre! I have a couple Tribers from the "Batter-Up" set, and is one of the reasons I actually like the Topps Laser series and the Kraft Pop-Up series. Great stuff!

Thanks for the post. I love seeing cards I never heard of before.

These are great cards and they're not as popular as the Goudeys and Diamond Stars so they can be found really cheap for a pre-war card.