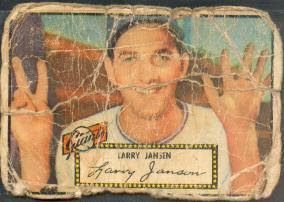 The card's condition muddies the relationship between Jansen's smiling face and the world around him. A long, heavy crease gives ol' Larry a rakish mustache. (Is that King Kelly? Rollie Fingers?) Both hands hover like trick horror movie props, one locked in a peace sign and another spread in final agony. The faded backdrop could be stadium seating--or the ribbed lifeboat of a sinking ship. "No problem," says Larry, "we've got room for seven more!" (According to my best research methods--talking with vintage collectors over pizza--Mr. Jansen fathered seven children, hence his photo pose for this seminal set.)
There is, of course, the shape of the card, which is sort of round. Its near-apocalyptic edge wear suggests it passed through the hands of each and every Jansen offspring before reaching me. Did Larry Jr. put daddy in his bike spokes? Use him for target practice? The card's a 1952 red back print variation, I think. Maybe Mrs. Jansen had to daub up a tomato spill, couldn't find a towel, and hey, here's an nicely absorbent card of the old man.

Aside from Topps' capitalization on America's post-war baseball enthusiasm, I propose this set made a big design discovery: the card back stat grid. Can you tell those 1930s and 1940s sets were edited by newspapermen? That's a lot of text for a W/L record or batting average. The way Topps re-framed these stats made them much more readable. By the 1960s, the numbers relegated text and cartoons to virtual steerage class, something that we almost expect now. Here's a fine example from 1981.

My pack-cracking inner child of the 1970s delighted in SLG % and SB counts, even as a lackluster Mariner lineup skewed my perspective. (Sorry former-me, a team 4.58 ERA wasn't good in 1979.) Oddly enough, I liked studying the numbers so much, my cards survived childhood intact. I mean, if that Mario Mendoza card didn't stay kempt and readable, maybe I'd forget his career batting average and have no way to find it again.
Posted by Spike Glidden at 10:24 AM