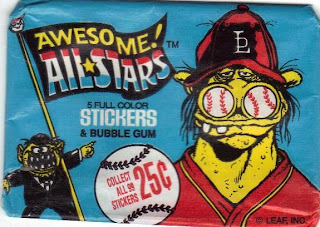 There's a recently-revealed blog called, "A Pack to be Named Later" upon which I am a contributing member. I bought four of these packs to post over there, and each pack will be displayed on a random date in the future. In the meantime, I thought it was an appropriate set for inclusion on this blog! After all, we're talking VERY weird cards and baseball. It's a match made in... Well, let's just get to the set, shall we?

The first thing we see when we open a pack is the gum:

I can honestly say I have no desire whatsoever to put this 21-year old gum anywhere near my mouth. The powder is still very fine and very messy. I'm sure I'll be cleaning my scanner for weeks to come.

There are 99 cards in the set, and in one of the packs I opened, I pulled the checklist - yay me! So, for those of you keeping score at home, here are the cards you'll need to complete your very own set of stickers: 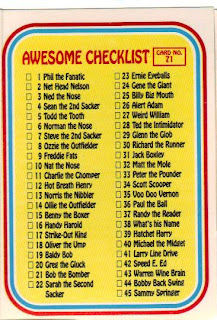 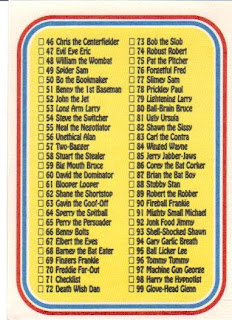 The cards themselves feature various characters sporting relevant (or opposite of what one might think) names. Also, Leaf writers evidently had a hard time coming up with names to go with certain alliterations, as seen in the two cards here: 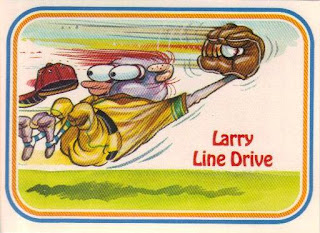 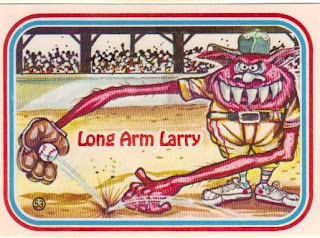 Larry Line Drive and Long Arm Larry... I guess they couldn't have very well used "Luke," now could they?

They also had no "Political Correctness" back in the late 80's, either: 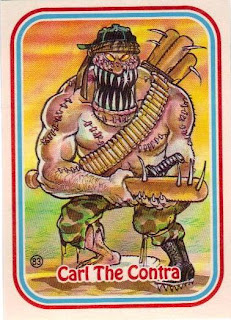 You couldn't get away with a character named "Contra" nowadays, I don't think.

And in honor of Carl Crawford's recent accomplishment, I thought I would include his predecessor: 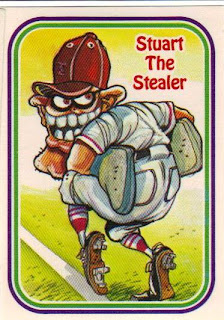 The backs of most of the cards include little write-ups about the player on the front. But, some cards have puzzle pieces on them: 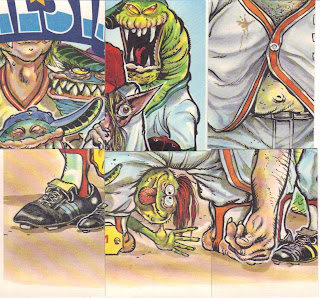 Collect all the pieces and have yourself a big-ol' time completing the puzzle.

The gum looks like one of those images of lungs they show on cigarette commercials intended to scare the sh-- out of you.

Told him that we will have to look into a time machine.

Oh my gosh, I've been looking all over for packs of this stuff for my blog.

I have at least 1 full set of these cards and 3 unopened packs of the cards each sporting the different wrappers they were sold in. I also can get ahold of the box containing all of the wrappers of the opened cards and original unit box they were sold out of.

I have a set (Missing 14,21,44..anybody got 'em?) that is the Exact same Characters as the 99 card set, by Don Russ, but mine only has 44 in the set, and they just changed some of the names of the players. Can anyone please help me Title/Label/date these.. Thanx,
KACZ

Some on sale on ebay!