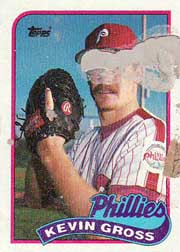 I have no idea what happened to this card. This one is personal though. This card was found in a game of Sox Or No Sox on A Pack A Day.

The insert card had apparently latched onto Kevin Gross for sustenance. This clearly resulted in Kevin's eyes to be sacrificed in order to save his pitching hand. The blob even split off into a mini-blob in order to slowly engulf Kevin's finger on his left hand.

Heat does nothing to stop the blob. Only the most frigid temperatures, like an air conditioned movie theater, can stop it. After being heated to sauna-like temperatures, this pack must have been frozen by a quick blast of cold air. The blob was stopped in its tracks and Kevin's life was spared to pitch again.

Now Kevin Gross has supersonic hearing, making him a deadly pitcher. That is to say, what makes him a deadly pitcher is that he is now blind. What batter in their right mind would step to the plate against a blind pitcher. Even pitchers with sight hit batters in the head by accident. What's to prevent Kevin from beaning Andre Dawson and blaming it on his lack of sight? Nothing.

Before you put your packs of baseball cards near a fireplace or a barbeque pit or the back of a jet plane engine, think of what it is doing to the player. These men have to live with these deformities for the rest of their careers. Be kind to them. They may be traded to your team in the future. Then how bad would you feel if your team traded for a blind pitcher? Not very good I would imagine. Save the players and beware of the blob.
Posted by Steve Gierman at 7:22 PM

I know its too easy but it must be said...

That card is GROSS, kevin GROSS!