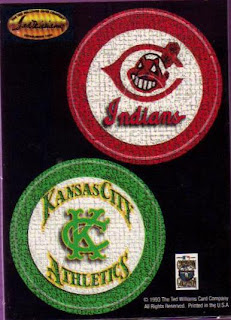 In 1993, the Ted Williams Card Company produced a set of rather unique items. Anyone remember "pogs?" Pogs were the thing to have and collect in the early 90's, a throwback to the milk caps kids played with the 50's or 60's or whenever it was that "Wii" meant either something was tiny or one had to use the facilities. In any case, the were little round discs. 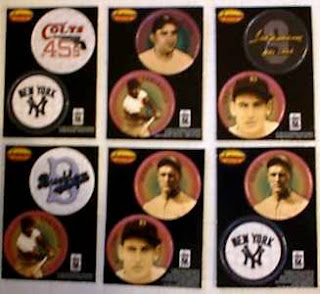 What the TWC did was to print the circles on cards, then have the cards die-cut and perforated so that one could punch out the pogs. You can't see it in the scan, but there was a thumb-like indentation on each pog. I have no idea how to play the game, other than you stack a bunch up and try to knock down the stack with your pog. Like a cardboard version of a cross between marbles and Jenga, I guess. 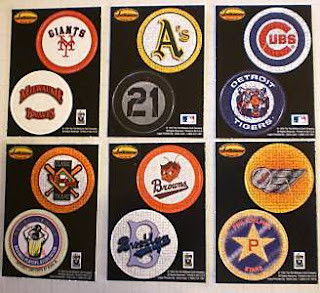 There were twenty-six pogs in all. Some featured vintage team logos and other featured players such as Yogi Berra, Lou Gehrig, and of course Ted Williams. These were laid out two to a card and could be found as inserts in the 1993 Ted Williams baseball card packs. 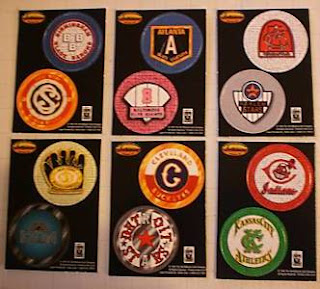 The checklist can be found on page 1725-6 of the 2007 Standard Catalog of Baseball Cards (16th ed). The first photo above is from my personal collection, but the others were found on theBay as a complete set. They make interesting conversation pieces, and your kids can Google and Wikipedia "POGS" to see what kids did before X-Box, World of Warcraft, or Yu-gi-oh...
Posted by --David at 6:36 PM

I love it when there is someThing Done to Cards that I have never seen. Awesome!

At one time, my kids must have had a million pogs. They were all over the house. And then one day, as fast as they appeared, they were gone. I have no idea what happened to them.

Although I remember pogs having all sorts of subject matter, I don't remember baseball pogs. I'd have stolen them from the kids for myself.