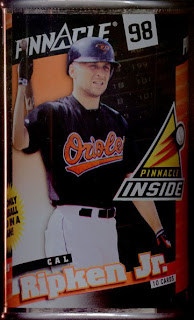 In 1997 and 1998 Pinnacle produced cards which they sold in a collectible steel can. You actually had to use a can opener to get the cards out.

There were ten cards in the can (they were packaged in clear cellophane) and the can cost $2.99.

There were 24 different players featured on the cans. Checking on eBay I see, you can buy any number of the cans for a buck. I've got 8 of these (one from '97, the rest from '98). Although they are 10 years old, they've held up well, by which I mean they are not rusting. 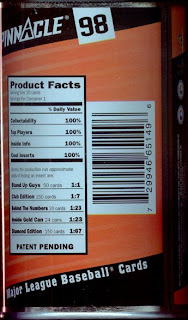 The rest of the product facts give the odds on inserts: Stand Up Guys (1:1). This was a two piece thing with slits cut up the center of the pieces. If you slide the two pieces together it would stand up! On each interior face a different player could be seen across the two pieces. I hated these.

Club Edition (1:7). This was a gold Dufex finish version of the base set.

Inside Gold Can (1:47). I don't have any of these either. It says this is a can. Was the inside of the can gold plated?

On the side it says "The Only Baseball Card in a Can"! 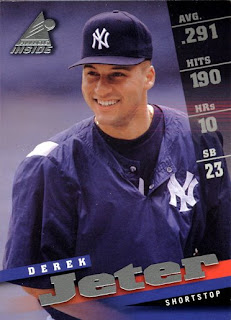 The cards were ok. They were glossy with silver foil on the logo and player name. There weren't many subsets, just a rookie subset and checklists cards with a player featured on the front.

Ultimately, I didn't really like the cards which is why I don't have many of them. I think I've seen the cellophane packages recently in repacks.

And as a collectable, the cans are a pain in the neck. They are about 4 1/2 inches tall and a little wider than a card. I've got mine in a box in the closet.

I already had the Ripken can scanned (that was an adventure). I pulled out the Scott Rolen can to look at details. I'll probably leave it on my display shelf with other Phillies stuff.
Posted by capewood at 3:53 PM

Gold cans were gold on the outside, not the inside. So if you were the first person to get to the stack of cans you could pick out all the golds. I was lucky enough to find a Chipper Jones gold can at a K-Mart once. Those cans really are a pain to store.

They must as hard to store as the Kodak ScreenPlays! What whiz bang came up with these, anyway!?

Nice set to feature, though I agree only a mother could love collecting them, given the challenge in stacking (and not knocking over) cans.

yeah I have the scott rolen and hideo nomo. both unopened.