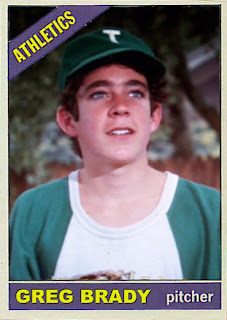 Before Greg Brady became a fictional doctor and even before he became the fictional Johnny Bravo, he wanted to become the next fictional Don Drysdale. Shouts of "Bonus Baby" could be heard as he drifted off into daydream land.

Fortunately, for the land of television doctors, Greg injured his arm and really got rocked when his head was in the clouds. So, to commemorate lost dreams, I created this card of Greg Brady. I know that the series was on slightly after this card style was made. And I know that he idolized Don Drysdale of the Dodgers. I used the team colors of his baseball team as a template and that screamed Athletics.

I also figured that the 1966 Topps issue would be around the time he was actively collecting baseball cards, so it would be a design that he could fantasize himself being on.

So there you have it. A Greg Brady baseball card. Will the wonders of fake cards ever cease? I sure hope not.
Posted by Steve Gierman at 3:54 PM