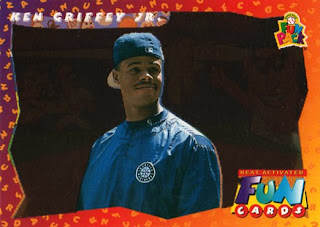 These cards went in for cartoon images, popular players, trivia questions, pictures of players when they were kids, team mascots and bright colors. I think these cards are mostly forgotten now although I guess there are probably people in their early 20s who look back fondly on them. I look back fondly on them because I bought them even though I was far from being a kid in 1994. 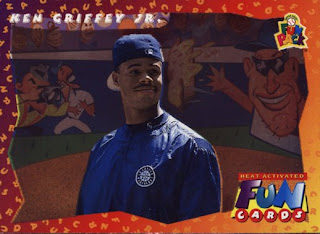 This Ken Griffey, Jr. card was part of a subset in the 1994 Fun Pack set. The card background is a drab black color. But the coating is heat-activated. When you press your finger on it, the coating becomes clear and a cartoon stadium background appears. I suppose that this little piece of magic will only work so many times but my Griffey card still works after 14 years.

The back of the card explains that Ken is serious "when the game is on the line" but "is all fun beforehand". It appears that someone (Jay Bruner?) is throwing a pie ("one of the games oldest pranks") at Griffey. On the left side is a guy with a camera and another player busting a gut laughing.
Posted by capewood at 8:24 PM