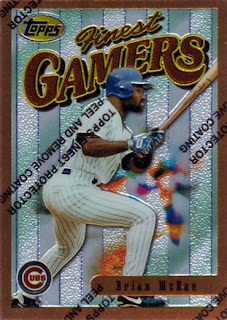 From 1995 through 1999, Topps put a protective plastic film on the front of their Finest cards. I don't think the first few years of Finest had this and as near as I can tell they stopped doing it after the 1999 release.

I don't know how many other manufacturers did this. I do know that Pinnacle put out a set called Select Certified in 1996 which also had a protective film.

When these cards first appeared there was much debate among collectors. Was the film a part of the card and therefor shouldn't be removed? Wouldn't the card look better without the film? If the film wasn't part of the card and you wanted to remove it, how difficult would it be to remove as the card got older? Would removing it damage the card if it was on too long? And just how many angels can dance on the head of a pin? 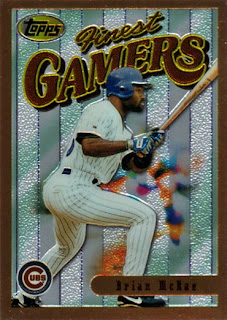 I can answer a few of these questions. The price guides don't mention anything about the film on these cards so I assume it doesn't matter to the price of the card if the film is removed or not. Does the card look better without the film? I think it does, but you can be the judge of that. The Select Certified cards look way better without the film. These cards have a bright mirror finish (which doesn't scan well) but the film makes them look dingy. I just peeled this Finest card and the film came off easily without any damage to the card. The film on the Select Certified cards is very difficult to remove now, you seriously risk bending the card in half. Also, the Select Certified cards have a quite a bow in them, I think due to the film. I believe that over time, as the cardboard has absorbed moisture it has expanded. The film has not expanded so the card bows inward on the front. The Finest cards are not bowed, maybe because they are thinner.
Posted by capewood at 4:26 PM

Interesting. We were wondering about this. Ha, the 2009 version may be high-end cards that are protected, the moment you pull them out of the pack, by little force fields. Undingable cards.