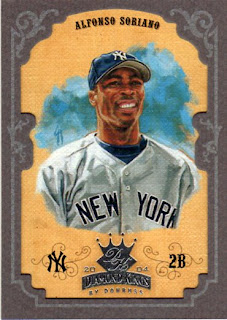 This card is a 2-ply card. The gray border is actually a frame applied to the base card. There have been other cards published with frames like this but the 2004 and 2005 Donruss Diamond King sets took it to another level.

I really like the 2004 set. I bought a box of these on eBay, paying, what is for me, an enormous price (I paid almost $90 for the 60-card box). But I really do love the cards. The base card Soriano is also shown below. The cards have a linen-type finish and have an old-timey look. The color smudge behind the player looks a lot like what Topps is doing now with their Allen & Ginter cards.

I just got this framed card in the mail. Besides it being a cool card, the other reason I decided to feature it is because, for me, it is a very frustrating set.

I think that collecting the base set would probably not be too difficult. But, in general, I'm not a set collector. 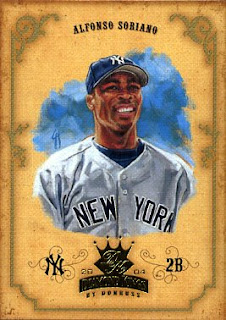 For me, I'd be happy to have a good collection of the base cards and also have at least one of each of the insert cards from the set. But for this set, such a goal is probably impossible. This set has 105 different insert cards. This isn't the worst set in this regard. As soon as I get it, I'll be posting a card from the 2005 Prime Patches set, which as over 200 inserts.