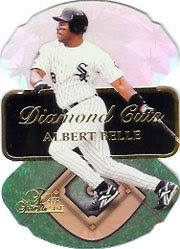 While these cards look innocent and cool, they are evil. They were part of a growing trend in the nineties that featured cards cut into shapes. This almost guaranteed that these cards would be the first to get mangled in your collection.

The trend has cooled as of late, but is still evident in releases such as SPx. They are hard to store properly because of the odd dimensions that these cards possess. Getting them into plastic is almost a joke. They chip and bend just slightly enough to notice.

Storing these cards in the hard plastic cases that split open sometimes don't work. On several occasions, a cut card will shift just enough in the case to where it will sustain very light damage.

Cards like these are pretty to look at, but deadly to the touch. Corners get snagged. Oddly shaped curves get crushed. It's a complete mess. If you have a steady hand and an eagle eye for detail, these may be the cards for you.

For me, they are just another oddity of the nineties. This particular set has 20 cards.

Looking over the checklist, there seems to be everyone that a card collecting fan would want in 1997. In 2008, the checklist isn't as impressive. It's still impressive though. Looking from today's perspective, the inclusion of Mo Vaughn and Todd Hundley are questionable.

There are a fair share of steroid abusers and some real superstars throw in for good measure. All in all, it's a nice looking set, but I still think it's evil. Cut cards have been done to death. I think it's time to let this trend die down a bit. It's OK to bring the cut cards out for releases every few years. Just not all the time.
Posted by Steve Gierman at 3:32 PM

I agree with the issues with die-cut inserts, but I personally liked this set. I didn't think they were as bad as some of the Topps Laser cards or this crazy insert from '97 E-X2000:

Wow! That looks brutal! I haven't run into the Topps Laser cards yet in person. Thanks for the info!

If you haven't run into Topps Laser, you're lucky. For anyone reading this that is unfamiliar, it was an all die-cut set, with each player having 1 of 4 different die-cut themes. Luckily, this crap only lasted 1 year. Being a dumb 12-year-old at the time, I loved it lol. The design given to pitchers was the worst. If you could get that in a sleeve without chipping it, you were pretty amazing: