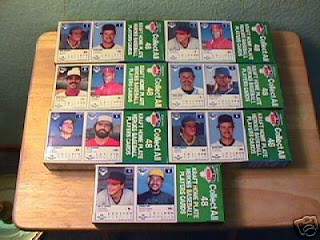 In 1987, Kraft Mac 'n' Cheese was pretty much a family staple. My kids were always finicky eaters and this was one thing they (aged 2 and 3 at the time) would eat. Today, it's one of the few things my daughter can cook and she probably eats at least a box a week.

The first picture is from eBay. Somebody is selling 7 complete boxes for about $10 (plus $14 in shipping!). I didn't remember that the boxes had two cards on them.

I've still have the Wally Joyner card pictured on the bottom box in the photo. 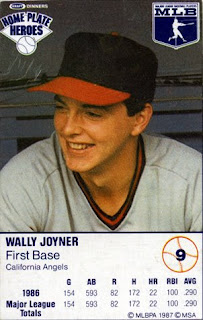 Notice that his hat is airbrushed to remove the logo. This is a common practice on cards like this. Kraft had a contract with the MLB players union, but not with major league baseball. So they could use the picture of the player but not the team logo.

The card is a bit smaller than a regular card and is blank on the backside. At the time, Joyner was a player I collected. About two years ago I was looking through the binders of cards I had and dropped some players. Joyner, I'm afraid, has been relegated back to the commons boxes to make room for some more deserving player.

There is another auction featuring just the double set of cards cut from the boxes. The other player on the box with Joyner is Johnny Ray but apparently, the matchups are random. In the other auction, Ray is paired with Harold Baines.

The eBay seller recommends that whoever buys the boxes doesn't eat the contents. Sounds like it would be worse than eating the gum from an unopened pack of 1987 Topps.
Posted by capewood at 4:59 PM

I've got a bunch of these panels somewhere. I ate Mac n Cheese like a madman that year.