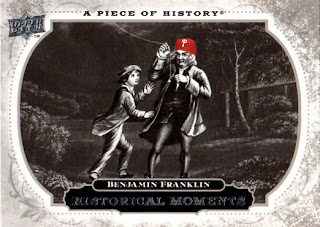 After reading Steve's last two posts I thought, well, I've got a card cut from a cardboard food box and I've got another card I've altered. I decided to go with the altered card first.

In a recent trade with Andy, I received from him a bunch of Phillies cards. In the pack was this Ben Franklin A Piece of History Card. I decided to keep him with my Phillies cards since he is, after all, one of the most famous Philadelphians. And I decided to give him a Phillies cap as well.

Isn't Photoshop wonderful? The hardest part of this was finding an already scanned Phillies card which had a hat facing in the right direction.
Posted by capewood at 4:02 PM

Email ThisBlogThis!Share to TwitterShare to FacebookShare to Pinterest
Labels: 2008, Phillies

I threw that card in since you're an ex-Philly guy--I had no idea you'd enjoy it so much!