A Reader's Jessica Simpson Mock Up 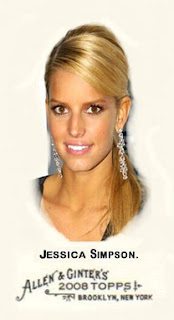 Tonight, I received a reader made mock up in my e-mail from Roger. Back in January 2008, in the very early days of this blog, I did a mock up of an Allen & Ginter Jessica Simpson card. This was a time where Jessica Simpson was considered a curse for showing up at games to support her boyfriend. She was labeled a distraction and blamed for losing the season.

While that's debatable if that assumption was fair, I thought it was funny. Some fans take their sports waaaay too seriously sometimes. I do think that she was enough of a distraction that there wasn't enough attention paid to the task at hand. I think that she has unfairly taken the entire blame.

So, here is Roger's take on Jessica Simpson using the Allen & Ginter 2008 logo. I think Roger did a great job! I'm happy that something I did could inspire someone to take the time to do their own take on it.

Is it just me or is Jessica channeling a little bit of Hillary Swank in this photo? Yeah, it's probably just me.
Posted by Steve Gierman at 2:40 AM