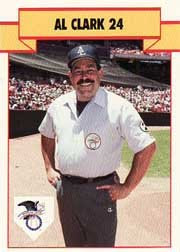 I thought this was an odd set when it came out. I think it's an even odder set now. Since they have unified the umpires, the AL and NL hats are outdated. No longer will I hear about Al Clark being the only umpire with his name on his hat.

The concept of this set is great. I can understand why a company would want to produce a set of this. Not only is it a way to honor the umpires of the game, but these cards humanize the "evil" umpires. You get to see that some are married, some have children. You know, the vital statistics. Although, I think the card manufacturers were inviting trouble by listing the city and state where each umpire resided. There are some crazy people out there who take wrong calls too seriously.

The best part about these cards is the back. There's trivia on each card. You begin to understand that the people who do umpire, have to make difficult decisions everyday. Some of the scenarios are downright bizarre, some are common sense. Still, some feel like a word problem in math class.

The one on the back of Al Clark's card is fairly easy, but there were a few where I was stumped a bit. Here's the one from the back of Al's card.

Like I said, most are common sense questions, with a little twist. Think you know the answer? OK, here it is.

Yes, the batter must be tagged or thrown out.

Like I said, pretty common sense. This is more common after the 2005 ALCS where A.J. Pierzynski ran to first after a swing and a supposedly dropped ball. Now every batter seems to be running to first and every third strike seems to be thrown to first. I don't remember seeing that too often before 2005.

I suppose that I am at an advantage. One of the main staples on my team's regular television broadcasts always let's the audience know about the umpires. So I grew up hearing about Al Clark, Rocky Roe, John Hirschbeck and many others.

I'll always have these cards to remind me of when the umpires worked leagues exclusively, instead of umpiring both leagues. I'll always have a card of the only man that used to wear his name on his hat.
Posted by Steve Gierman at 1:53 PM