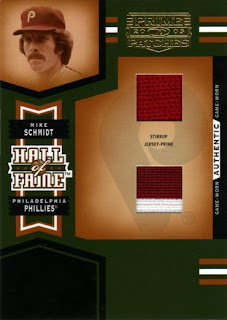 Or at least that's what the eBay listing said. The top swatch is actually from a game-used stirrup. That's not the same as a sock but it's worn on the same part of the anatomy.

Like the 2004 Donruss Diamond Kings I posted a few days ago, this is another set which is full of inserts. There were 209 inserts with this set. There were 89 cards in the base set and 4,345 different insert cards. All of the insert cards had either an autograph, a relic, or both. Many cards have more than one relic, some have as many as 4. All were serial numbered.

I never saw a pack of these cards in the wild. According to Beckett, there were 2 inserts per pack, so I'm guessing the packs were expensive. They cards are not hard to find on eBay and some of them are reasonably priced. I paid $14.32 for this Schmidt card. I probably wouldn't spend so much for any other player.

Man, that is a sweet card. You're a Phillies fan, Cliff?

Nice socks! That reminds me of buying some game-used David Segui pants on eBay. (Hey, it wasn't a jockstrap.) Things that aren't a jersey or bat seem to go for a lot less, like $140 for a Segui jersey vs. $50 for Segui shoes. Once it's in a card, though, what do you think? Does a shoe leather card hold the same appeal as a jersey swatch?

I'm a Phillies fan who grew up in Philadelphia but moved to Houston in 1995. I'm still a Phillies fan but I root for and collect Astros (at least cards from 1995 and on).

Yesterday I pulled a Cole Hamels UP artifacts jersey card, with a red pinstripe no less!

And by UP I mean UD