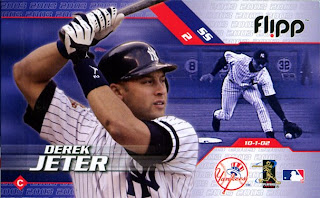 I don't know too much about these things. I got 4 of them as a bonus in several Fairfield repack boxes a few years ago.

Well, what is it? It is a little booklet with 30 pages. Each page is a sequential photo of the same play. When you flip the pages you get the see the whole play like a little movie. It's pretty low tech (we used to do this in high school with stick figures in the pages of paperbacks we had to read for English class). But also pretty effective. A scan of the front cover doesn't do it justice. If you flip from the front, you see the player batting. From the back you see a defensive play. I have two A-Rods, one Jeter and one Jim Thome. The Jeter and Rodriguez have the dates of the plays on the cover. The Thome doesn't but notes that the at bat was Thome's first home run as a Phillie. Sizewise, its as wide as a baseball card but about 3/8 of an inch longer. Its also a quarter inch thick. I've had them sitting on my desk since I got them because I don't know what to do with them. The Jeter card is currently on eBay at a Buy it Now price of $6.99.

For awhile, the Fairfield boxes had these bonus objects. Most were not baseball cards but were baseball related. I'll post some more of them later.
Posted by capewood at 11:39 PM