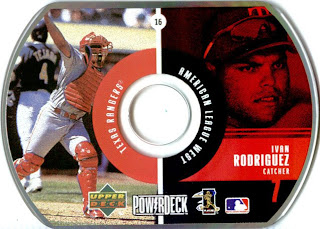 A baseball card as a CD-ROM.

Upper Deck produced these in 1999 and 2000. An eternity ago in computer terms. The base set consisted of these cut down CDs. They were cut down so they would fit in a pack with normal sized baseball cards. There were a few insert sets. You got two of these in a pack along with 1 or 2 insert cards.

I've always had a Macintosh at home and, even though it was supposed to be compatible with a Mac, I've always been afraid to put the thing into my CD-ROM drive. So I've never seen what's on the disk.

If you're a computer geek, check out the minimum requirements for playing this disk: Pentium processor-based PC. 133 MHz, 12 MB of available RAM, Windows 95/98 or NT 4.0. QuickTime 3.0 extension for Windows (included), 16-bit color display monitor (required). Sound Blaster card, 4X or faster CD-ROM drive. In those days, a computer like that just screamed with power.
Posted by capewood at 7:22 PM

It's funny to watch the videos on these things on today's hi-res computers. The videos look like postage stamps nowadays. There are a lot of facts and figures on the CDs, along with pictures and other player-related multimedia items. Talk a gimmick item!