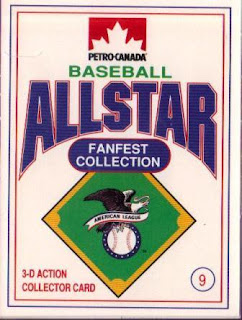 During a recent mailing, I received a 1991 Petro-Canada Allstar Fanfest Stand-up card. The cards were handed out at the All-Star game in Tornoto. 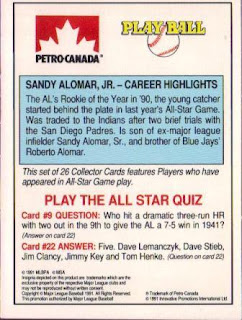 There are 26 players in the set with the sole Indians player being Sandy Alomar, Jr. The back of the card sports a "Career Highlights" section regarding the featured player. There is also a trivia question followed by a trivia answer to a question from another card.

Since I already own one of these cards and it is neatly tucked away in a binder, I thought it would be fun to actually put this one together! There are a couple of score marks on the card to help guide you in assembly. If you opt to put it together, take your time. Additionally, there are some pieces that get punched out in order to create 'space.' The inside of the card shows player stats for the last five years. The finished product is classic cheesiness: 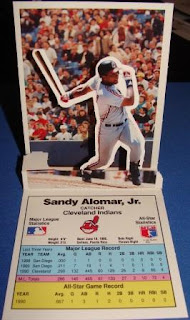 Don't you just love the fans in the background?

The twenty-six players in the set are:

I can not thank you enough! For years I have avoided "opening" my Tony Gwynn Petro-Canada.

As cheesy as the inside is, it sure beats the bleh exterior. I can't wait to dig it out and pop it open. I never had any intentions of selling it. It will sure look better "in bloom" on a shelf than in a box in the closet.