At first, we had jersey swatches. We all went nuts for them (okay, maybe not everyone, but a lot of collectors). Then, we had bats, bases, gloves, dirt, seats, gum from the bottom of seats, toilet paper, oh wait...

Well, at some point, the fine folks at Upper Deck decided that patches actually USED or WORN by players was getting passe' (not to be confused with rounding up a posse, which we may all do after this post). So, instead of using the bits and pieces they already had, Upper Deck decided to have someone MAKE UP patches for them! Rather than call them "patches we paid someone to create," Upper Deck chose the softer, gentler vernacular: Manufactured Patch. Ah, doesn't that just roll off the tongue? 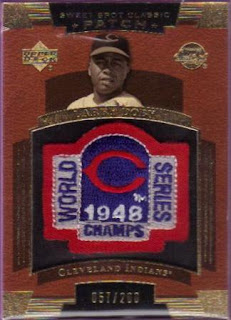 This is a 2004 UD Sweet Spot Classic Patch card of Larry Doby. Don't get me wrong... I think these are VERY cool cards. If you can't get a real memorabilia piece from Larry Doby's collection, you can always make up your own! The look and feel of this one is pure vintage stuff. Even the patch looks like it could have come from a 1948 cap (you know, a little insignia to commemorate the title sewn into one side or the back). Speaking of back, the back of the card makes it clear that this is no "run-of-the-mill" game-used item here, folks: "(This) souvenir logo patch... was specially created for the Upper Deck Company..." 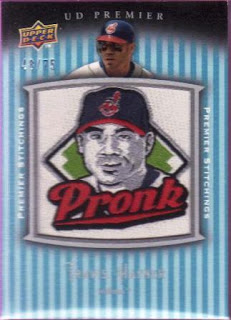 This one is a 2008 Upper Deck Premier Stitchings Travis Hafner card. How many people do you know that have a patch made in their likeness featuring their nickname? Yeah, me too... By the time these gems were being kicked out, the backs of the cards state, "You have received a manufactured patch baseball card. On the front of this card is a manufactured patch. Enjoy your card!" Okay, what am I, an idiot? Am I so dense that you have to tell me TWICE in back-to-back sentences that the patch on this card was never worn by Pronk? 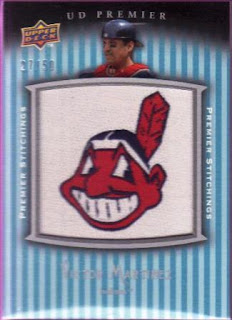 The Victor Martinez is also a 2008 UD Premier Stitchings, but his features Chief Wahoo instead of his own likeness and nickname. The back of his card says the same thing as Pronk's. Basically, it reads, "We paid someone to create this patch. No one wore it. We made it. Well, *WE* didn't make it, we had someone make it for us, but in case you don't understand that, we are going to tell you again - we had someone MAKE this patch for us. And you bought it. Sucker."
Posted by --David at 11:33 AM

I think I'm more annoyed by the directive to "Enjoy your card!" Is that an order? I'll enjoy it if I want to enjoy it. I'll burn it if I want to burn it, thank you very much.

LOL, if I end up with another one of these, I may put the 'burn it' in action..

I have a couple of those UD Sweet Spot Classic Patch card cards (Ashburn and Schmidt) that I bought on eBay. I like them. The darn things are about a quarter inch thick making it difficult to get into an album sleeve.

Amen to that! In fact, you can't just use any old binder page or sleeve! I had to scan them in the pocket page because I couldn't get the blankety-blank things out easily!

Manufactured patches are the biggest scam perpetrated on the American public since Pacific Vanguard.