Is that a Mike Piazza hanging from your tree, or are you just happy to see me? 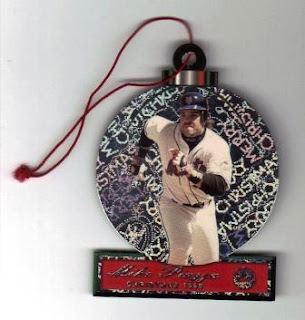 You have to admit, when it comes to die-cut cards, Pacific was pretty much the king of the hill. I have never seen so many odd shapes and configurations as Pacific developed over the years. These 2000 Ornaments are no exception!

There are only 20 cards in the set and each was cut out to resemble an ornament. Some were bells, stars, balls, whatever. They've got a cool holographic design in them that makes them do all kinds of 'shiny' things when the lights of your tree shine upon them and the ceiling fan move the air, creating a breeze... Well, I *DO* live in Arkansas, after all.

It's one thing to see yourself on a baseball card, but I wonder what the players think when they see themselves on one of these things... "An ornament!? Really? And my agent signed off on this? Can I have one?"
Posted by --David at 8:43 PM

I don't think I've ever seen those. I almost want to go look for the Mike Piazza one now. :)

I'll happily trade it to you!

These cards are awesome. They came in the pack with those strings so the pack was all lumpy when you opened it.

It would be ironic if they made an ornament card of Shawn Green.