I cannot believe it has been four years (this being written in 2008) since my son participated in the 2004 Pitch, Hit, and Run contest that was held in our town. He did well enough to make it to the regionals in Houston, but decided he didn't want to go. That turned out to be a shame because we were told he would have been the ONLY contestant in his age group. I find that hard to believe, but whatever.

At the contest, there were stacks of these sheets laying on a table. They were free for the taking. I wish I had been a lot more greedy than I was. I snagged two untorn sheets and left a LARGE stack behind. 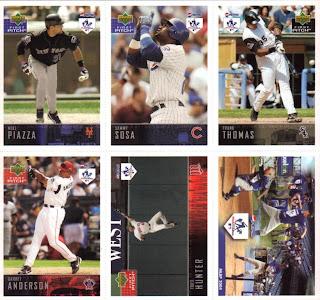 The cards came in a set of six and are perforated, should one wish to separate them. The only thing that distinguishes these cards from regular 2004 UD First Pitch cards is the white home-plate logo with "Pepsi" above it. The home-plate logo is the Pitch, Hit, and Run. Though there are six cards, only five players made the cut: Garret Anderson, Torii Hunter (An Arkansan), Mike Piazza, Sammy Sosa, and Frank Thomas. The sixth card is one that features a child pitching, hitting, and running and the back has a place for the contestant to record his/her results from the contest.

I had actually forgotten all about these until my last post about the 'vette cards. These are in the same binder as those. It's finds like these that should serve as a reminder to all of us that we need to break open our binders every once in a while and take a trip down memory lane...
Posted by --David at 11:02 AM

Those are great. I was always impressed by the photography on First Pitch from that year. Lots of action shots.