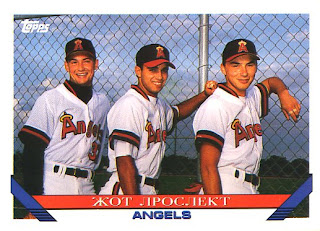 There isn't really anything that unusual about 1993 Topps and I actually really like the design from that year but I wanted to feature this odd-ball card from the set.

Each of them played for the Angels rookie level teams in 1992 and 1993, and then I guess they were deported.

Rudy Razjigaev was a pitcher who appeared in 15 games, pitching 13 innings. That's not a lot of work for two years. He had an ERA near 6.

Yevgeny Puchkov was an middle infielder who appeared in 52 games with a .208 batting average.

Ilya Bogatyrev was a 3rd baseman who appeared in 44 games and hit a lusty .241.

I wonder what happened to these guys?
Posted by capewood at 4:14 PM

Email ThisBlogThis!Share to TwitterShare to FacebookShare to Pinterest
Labels: 1993, Russians

I'd guess anybody who was working on an autographed 1993 Topps set is wondering what happened to the Russian trio as well.

That reminds me of the movie 'Comrades of Summer' - I bet Manual taught these guys everything they know.