Thorzul Will Rule Contest Card: The Birth of a Monster

Happy Halloween! I am typing this by the haunting glow of a jack-o-lantern... I blame all typos on the less than suitable lighting conditions.

This evening's card is the "hit" from the pack I submitted for Thorzul Will Rule's First Annual Card Halloweenification Contest. That is not the actual name of the contest, but I figure if you win the thing you earn some re-naming rights.

I had a bit of an unfair advantage in the contest. I have been making cards since I was in tee ball. (If you can find it, the Rancho Penasquitos Hawks team set will cost you a pretty penny on Ebay.)

The rules of the contest were fairly simple: to "Halloweenify" a baseball card and submit it for judging. Entries could be sent via email, but it was made clear that cards "in hand" would have an advantage. I decided to use my collecting philosophy to win the contest. If one card is good, a bunch of cards is better. My concept was to manufacture a pack of cards, including the wrapper.

I thought it would be cool to create cards of horror movie villains. Using a card design contemporary to the release date of the film (i.e., Psycho 1960, The Shining 1980, etc.) I figured it would be a diverse and entertaining pack. After four cards I was happy with the progress. It was good. It wasn't great. 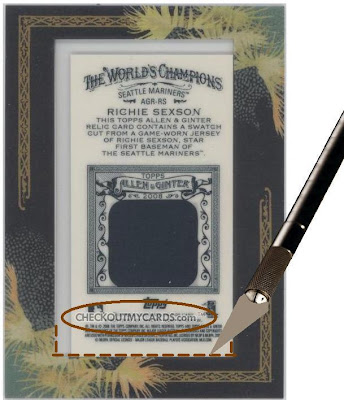 I needed something to push my pack into Coolsville. Whenever I open a pack and pull a game used jersey or bat card I still get a thrill. The idea for a game used "bat" card seemed cool. A chunk of flying mammal embedded into a baseball card turned out to be a little too gory. I decided that sticking with the movie theme would be a little less horrific. Little did I know...

The choice of what set of cards to use as a model was easy, thanks to my recent addiction to '08 Allen & Ginter. I really like the encased mini autos and game used cards. I have a few gamers that I wouldn't miss; and the "shell" would certainly add to the authenticity I was aiming to achieve. A little x-acto knife action and a steady hand, and Mr. Sexson was free. I found another copy on Check Out My Cards. So if I ended up missing his original, encased state I could always get another.

I decided to showcase Regan McNeil from The Exorcist. That movie scared the crap outta me the first time I saw it. (Full disclosure: I only saw it once. Well, I saw most of it. I closed my eyes and covered my ears for the scary parts.)


I used a Brian McCann card as a base for my design. With minimal MS Paint manipulation, the card began to take shape. Like I did with all of the cards, I printed my designs on sticker paper and affixed the fronts and backs to old Milwaukee Brewers cards. 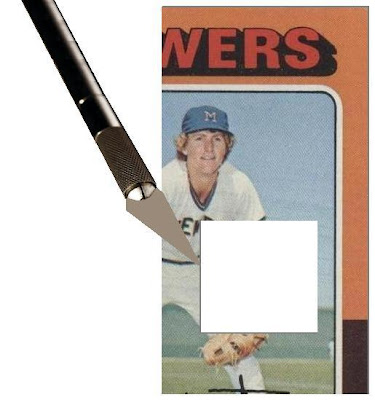 I_had_to_cut_a hole in the substrate card large enough to accomodate the "game used" material. The material was a little more complicated than I expected. At first, I cut a swatch of soiled tube sock. I thought it mimicked the vomit stained nightgown quite well. Unfortunately, The sock was too thick. Fortunately, I found a pair of holey, old underwear that had been serving as a dust rag. Sorry, Thorzul.

The sticky reverse of the card back held the briefs in place while I stuck on the front. 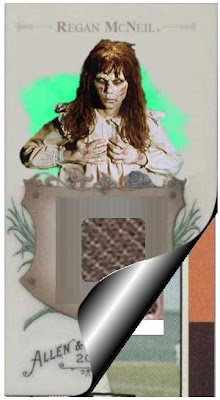 Inserting the new card into Richie Sexson's old haunts proved much easier than the original operation. 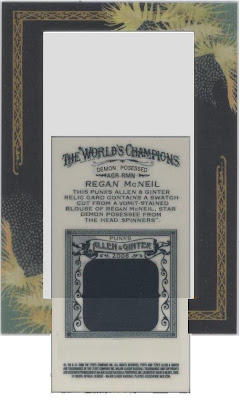 This is what the "finished" product looked like, fresh outta the pack. 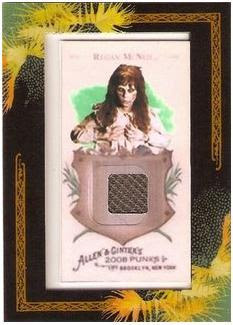 What few people know... There was supposed to more!!! I was going to make the card MUCH more dramatic! The "game used" card was going to come to life. By melting a couple of shades of green crayons, I was planning on having pea soup colored "vomit" spewing from the opening on the front of the card. It would have been AWESOME!!! I wasn't sure how the molten crayon would react with the plastic case, so I decided to leave it off.

In retrospect, I probably wouldn't have sent in the entry if it would have turned out as awesome as I had imagined. If nothing else, we gained another post on Things Done to Cards.
Posted by PunkRockPaint at 11:39 PM

The cards you sent were affixed to the back of Milwaukee Brewers cards?

Tell me you did not... I repeat... did not use a 1975 Robin Yount card to make these. Please let me know that it was a Glenn Braggs, or perhaps a Rick Cerone.

Heh-heh... When PunkRockPaint and I exchanged 'preview' looks at each other's cards, he told me about the 'hidden trick' and I was laughing my head off! I think he was hoping you might 'peek under the hood' and see what lurked just under the surface.... :-)

Thanks for the post on how you did this! I've been playing with custom card myself and I can see some tips that will help out with my own 'game-used' items for an upcoming tourney.... :-)

punkrockpaint is Micardangelo, there is no doubt about it.