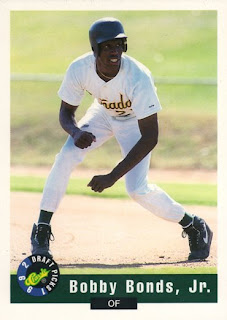 This is a really obscure card set. It is not listed in either the big Beckett or the big Sports Collector's Digest catalogs I have. It is, however, listed on Beckett.com. There is nothing special about the cards or the set (although Derek Jeter is featured in the set). I have 3 of the 150 cards in the set which I got in a repack somewhere along the way. I only posted this card because of who is on it. That's right, Bobby Bonds Jr., Barry's little brother. Junior played one year of ball at Canada Junior College in Redwood City CA before getting drafted by the Padres in the 18th round. Canada is spelled with a tilde over the N (you can just about see it in the photo). It is known for having a large program to teach English as a second language. There are actually some notable ball players from there, Moises Alou and Harold Reynolds.

On the back of the card it says "Bobby Bonds, Jr. is known for his agressivness in the outfield, on the basepaths, and at the plate. He follows in his father's footsteps as an outstanding defensive outfielder. Scouts have marvelled at this explosive quickness and raw talent for the game". This judgment was based on 27 games for Canada, where he had 64 AB, 4 HR, 20 RBI and 16 SB. But apparently this "raw talent for the game" didn't get him anywhere as he wasn't signed by the Padres.
Posted by capewood at 1:05 PM

Email ThisBlogThis!Share to TwitterShare to FacebookShare to Pinterest
Labels: 1992