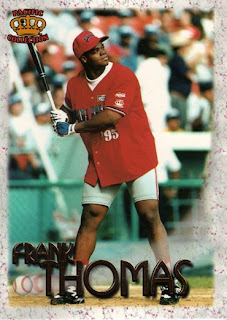 Here's something you don't see every day, a baseball player's knees. Frank looks like he forgot to put his pants on when he came up to bat.

There are 8 cards in this set: Mike Piazza, Sammy Sosa, Frank Thomas, Roberto Alomar, Carlos Baerga (of course), Edgar Martinez, Bernie Williams, and Kenny Lofton. All of them played in this celebrity softball game in Puerto Rico put on by Baerga in 1995. The cards were given away at the 1996 game.

I got these in an interesting repack put together by Fairfield. The cards came in a nice cardboard box with a hinged lid. "Contains At Least 5 Packs". "Special Bonus Mystery Box Inside". "Contains 200 Cards Plus Rookies & Stars". At Least One Memorabilia Card in Every Box". All this for $19.99 plus tax.

The Baerga cards were inside the "Special Bonus Mystery Box" along with a 2005 Fleer Patchworks Jersey card of Michael Young (Upper Deck swears the jersey piece came from a jersey actually worn by Young in an official Major League game). Plus a hunk of Styrofoam.

The main box also has the usual collection of mid-1980s to mid-1990s cards, plus one football card. Bob Gain of the University of Kentucky's. I never heard of him but Gain sounds like a good name for a running back but he was a lineman who played in the 1950s for the Browns.
Posted by capewood at 11:16 PM

Oh, now that is cool! I've not seen those!! I'll have to try and find them for the Tribers (and ex-Tribers) in there!

They made a Baerga Softball set in 1997 too, I'd pay at least $10 for the Justice card in that set...never seen one in years.