Many sets published these days include a time-critical element. They could have redemption cards, for example, or series-specific subsets. The message is clear: you need to purchase more cards now. Seriously, get that extra box this minute or suffer from a poorer collecting experience. For example, Topps' 2008 Allen & Ginter issue included a puzzle contest in its World's Greatest Victories subset. Solve the puzzle (and someone did) to appear in next year's version. Awesome.

Unfortunately for your savings account, solving the A&G puzzle meant collecting two rare parts of the set, the Victories themselves and the (humorously fictional) Team Orange baseball players. Though the former showed up with some frequency, Topps stated that those T.O. cards came only 1 to every 6 boxes. You can see how the strategy would (ideally) move a ton of product! As successful as A&G's idea proved, and it helped that the set was generally excellent, Topps' contest is hardly an innovation. As observed in one of my business classes, is there anything about motivating people that wasn't already known in Moses' time? 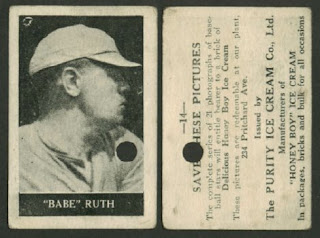 Back in the 1920s, Canada's own Purity Ice Cream company challenged collectors to amass all 21 cards from their 1927 Honey Boy set and redeem it for a free “brick” (half-gallon?) of the sweet stuff. Knowing my own enthusiasm for both the cardboard and the cream, I'd probably end up with as many of them as mowing lawns would provide. When someone did redeem the set, the maker punched each one with a small hole, as seen on the #14, Babe Ruth. (Image credit to Cycleback.com.)

Given the contest's era and localized nature of the release, it's surprising that a full set made it to the 21st Century—but at least one did. The great collector (and wartime agent) Edward Wharton-Tigar's estate sold it as part of a larger lot in the late-1990s and the Honey Boys went as a unit for $5000 soon after. I recently acquired an unpunched #5, “Snake” Siddle, which brought them onto my personal radar. As noted on Cycleback's story of the set, most cards are major league stars, but the first 8 show Canadian players. Mr. Siddle later became an umpire in the Great White North and is only known to the interwebs as calling a 1930s barnstorming game pitched brilliantly by Satchel Paige. But did Snake score some free ice cream for his efforts? And did he eventually Escape from Manitoba?
Posted by Spike Glidden at 11:37 AM