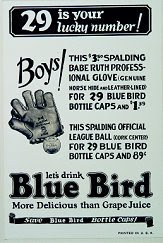 The front of this card is an image we've all seen before. It's a photo of Babe Ruth swinging the bat. Not a huge deal. There are thousands of cards featuring the same or nearly identical pose.

What makes this card unique is the back of the card. Geared towards boys, this promotion featured a glove and a ball. Only two different cards are known to exist, both feature Babe Ruth.

Or you could have a ball with the other offer on the back.

Depending on how much a Blue Bird grape soda was in 1933, this could have been a great deal or a cheat. Either way, I'll bet kids were drinking Blue Bird in 1933.

I wonder if any future major league players got a glove from this ad. It seems plausible that at least one player would have. Although, I had an orange Mike Schmidt ball and I never even made it to little league. Things would probably be different if I were a kid today.

I could imagine myself as a kid in 1933. I'd probably bug my mother for money to buy Blue Bird grape soda or try to help out at a local store to raise enough money to buy some. Maybe I'd work for soda instead of money. I could be very focused on what I wanted when I was a little kid. Enough to miss the big picture occasionally. All I know is that I'd be a fan of Babe Ruth if I were alive back then. That is unless Babe was facing my team.
Posted by Steve Gierman at 10:12 PM