Holy kangaroo, Batman, it's a Cardsupial! 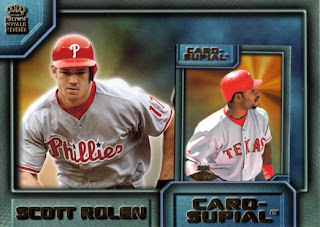 When Steve put out an invite to write for Things Done To Cards, I figured "What the heck?" I wasn't wasting enough time on my own blog. By the way, I'm Cliff, aka Capewood over at Capewood's Collections. I'll try not to shameless promote my own blog while I'm here.

What to make of Cardsupials? These were an insert set to 2000 Crown Royale. I've gotten 2 of these now in repacks. This one features Scott Rolen (a Phillie, so good for me). Next to Scott you see Ruben Mateo. This is actually a Cardsupial Mini Card and is tucked into a little pouch 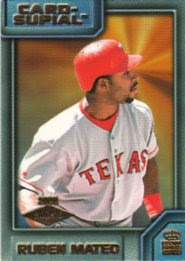 on the main card. Get it, it's tucked into a pouch. Hence the play on words.

I've seen a lot of baseball card designs in my time and I often wonder about the creative process. Where do baseball card design ideas come from? I've actually considered making a list of design elements. So what's this card got? High gloss finish? Check. Gold foil? Check. Landscape orientation? Check. Fuzzy background? Check. Pouch? Let's add that to the list.

Ok, so once they've got the design, the next choice is what players to include. This is only a 20-card insert. I've got Scott Rolen and Nomar Garciaparra. Rolen had a good 1999 season with the Phillies hitting 0.298 with 26 HR and 89 RBI. Garciaparra hit 0.357 with 27 HR and 104 RBI with the Red Sox. Both good choices for a short insert set. The rest of the set is rounded out by the usual cast of characters you'd expect to see on an insert set in 2000. Ripken, McGwire, Gwynn, Bonds, etc.

But with this set, the designers had to come up with a second player to go with the main player. Mateo was paired with Rolen and Richie Sexson was paired with Garciaparra. Mateo hit 0.238 in 32 games in 1999, his first year in the majors. I'm not that familiar with him but someone must have thought he had potential. He hit 0.291 in 52 games in 2000, which was pretty much his best season. He was gone from major league baseball after the 2004 season. Sexson had 31 HR in 1999, his third season. He's still a regular player and has had a decent career. If the choice for the mini-card was meant to be solid, second-tier players, then Sexson was a good choice, Mateo not so good.

The third choice was who to pair up? And here is where I have a problem with this set. Why pair Scott Rolen and Ruben Mateo? Were Rolen and Mateo twins separated at birth? Is Rolen Mateo's mother (which is carrying the marsupial analogy way too far)? Was Rolen a mentor for Mateo? Probably not, they played in different leagues. They both wear red batting helmets? Let's see, Garciaparra and Sexson are wearing blue batting helmets, so helmet color it is!

It you made it this far, thanks for reading.
Posted by capewood at 5:38 PM