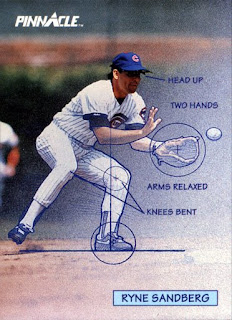 This card is part of a subset of the 1992 Pinnacle set called "The Technician".

The card appeals to me on two levels. As an engineer, I like the way that a portion of the card is turned into an engineering drawing. The back is made to look like the title block of a blueprint.

Sandberg was to play only 57 games in 1994 as he announced his retirement on June 13. Of course he came back in 1996 and played another 2 years.

Sandberg is one of those 'what-if' players for me. He was the 20th round draft pick of the Phillies in 1978. He actually 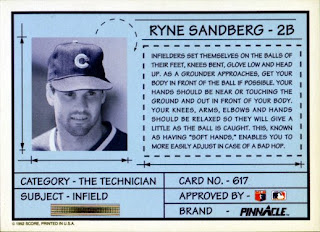 appeared in 13 games for the Phillies in 1981 as a September call-up. I have no memory of this. In January 1982, the Phillies traded him and Larry Bowa to the Cubs for Ivan DeJesus. DeJesus was coming off a year where he batted just 0.192 in 106 games, so the Phillies couldn't have been expecting much offense from him. He lasted with the Phillies until 1985 when they traded him to the Cardinals for Dave Rucker. Sandberg went on to have a great career with the Cubs and get voted into the Hall of Fame in 2005. This was one of those one-sided trades that happen once in awhile. So what if the Phillies had kept Sandberg...
Posted by capewood at 12:11 PM