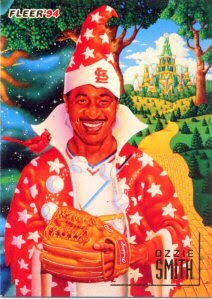 I get that Ozzie Smith was nicknamed "The Wizard". Why does he need to be in an Oz-like setting on a trading card? At least they didn't make Ozzie stand in front of some portrait studio background featuring a yellow brick road and an Emerald City.

Isn't the Emerald City actually Seattle? That's a far away place compared to St. Louis. Although St. Louis is a great city. I vacationed there in 2007. I just wish I had planned the trip better. I can't switch my fiancee's birthday though.

Ozzie Smith is a big part of that. I always loved to see Ozzie play, when I was a kid. He always seemed to be a likable guy that I could hang out with. I'm sure he spent all of his free time wishing that he could spend time with me. Then again, probably not.

I did enjoy his acrobatics in the infield and his stellar play there. Fleer could have commissioned a better drawing of Ozzie. It captures his likeness very well, but the red robes make him look like he either stepped out of the shower or joined a religious cult.

I suppose he could be trapped inside the Legend Of Zelda game. It looks a little like that and a generic Oz.
Posted by Steve Gierman at 2:00 AM