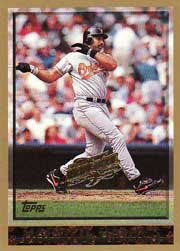 It seems that every new team that has popped up since 1993 has gotten their own parallel set of cards by Topps. They commemorate each teams inaugural season. This example is a 1998 Topps Harold Baines Tampa Bay Devil Rays Inaugural parallel card. Say that five times fast!

These cards look exactly the same as the base card, except for one small minor detail. A foil logo somewhere on the card designating it as an inaugural card. I've heard that these cards were limited to a print run of 5,000, but I haven't found anything concrete to back that up.

I can understand wanting to celebrate something as special as a brand spanking new team. These cards make it very difficult for the team or player collector to complete their collection. I wasn't into the hobby in 1998, so I'm not sure how these cards were distributed. Were they in packs or were they available only at hobby shops?

If I have the correct print run information, it would seem that seeding these cards into packs would be the best way of distribution. I could be wrong though. 1998 saw the parallel cards of the Tampa Bay Devil Rays and the Arizona Diamondbacks. I think this is a pretty cool idea. I just hope that the next team to switch cities or the next new team introduced gets a reception like this. I'd hate to see something more than a parallel set.
Posted by Steve Gierman at 11:46 PM

According to the 2007 annual Standard Catalog these cards were available only as a set and only at the D-Backs and D-Rays 'normal souvenir outlets". And only 5,000 were produced. I didn't do a check on eBay but I'd guess these cards are pretty hard to find today.