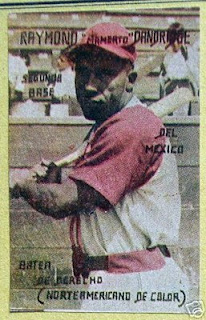 Check out this Mexican card of Hall of Famer Ray Dandridge. It came from an eBay auction full of previously unknown Mexican cards. I stumbled across this, and many others like it, on Blue Heaven.

The auction is long over and someone walked away with an album full of these cards for $2,450. Not too bad considering the condition of some of these cards.

Besides being a forgotten set, these cards were printed on thinner stock. They were made to be pasted into albums. Considering the quality of the stock and the torture that most of these cards endured, I'm surprised at the overall condition.

In addition to the regional stars, Mexico had its share of Negro League players playing baseball. Most Negro League stars had no other choice available to them.

This was a rare find and a treat to see. Hopefully more cards will pop up. I'm a bit doubtful, as the print run is believed to be limited. One can only hold out hope that more cards will appear.

I would imagine that for some players it would be their only appearance on a card. No American baseball card company, to my knowledge, produced any cards featuring Latin American players in the forties. This is an opportunity to learn a different part of baseball history that might have been lost forever.
Posted by Steve Gierman at 12:59 AM

Email ThisBlogThis!Share to TwitterShare to FacebookShare to Pinterest
Labels: 1945, Mexican