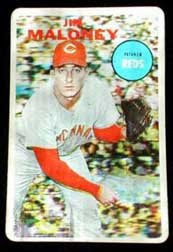 I'm guessing that the 3-D craze was on the rise again in 1968. How else could you explain the presence of this card. It's difficult to see exactly what is going on with the card. Jim looks to be stuck in the opening credits to The Lucy Show.

I suppose it could've been worse. He could be trapped in front of the fireworks from Love, American Style if the card came out a few years later. Jim looks a little like the father from the spin-off Wait 'Til Your Father Gets Home.

I have never seen one of these cards in person, but I'd be willing to bet that it looks a whole lot better in person. This card looks like it's got some serious kaleidoscoping flower power graphics. By looking at a photo of an uncut sheet, the background is actually a stadium.

Roberto Clemente is the most sought after card of the 12 card set. It's one of the most coveted sets because of its uniqueness and rarity. According to sources, the test issue was only available in Brooklyn. Others in the set include Tony Perez, Boog Powell, Mel Stottlemyre, Curt Flood and Rusty Staub.

This set is considered by many to be Topps most beautiful set of the sixties. It's a shame that this didn't get further than the testing phase. Kellogg's would copy, but not fully duplicate the basics of this set for their own in the seventies. Those Kellogg cards are said to pale in comparison.
Posted by Steve Gierman at 11:47 PM