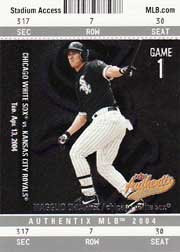 When I started back into collecting around 2004, I only collected cards from my favorite team. I still adhere to that, but I pick up packs and blasters and boxes because it's more fun that way. It's the thrill of collecting.

I didn't get back into full-time collecting until 2007. I am still amazed at the products that I missed since 1994. One of those would be Fleer Authentix.

I started back by collecting team sets and player lots. I thought that I'd be smart this time around and focus on what I really wanted. It's worked... to a degree. One of the releases that I blind bought on eBay was the White Sox 2004 team set of Fleer Authentix.

When these arrived, I had no clue what to make of them. My eyes were fooled into thinking that these cards were wider than they actually are. It's really an optical illusion created by the design. I loved the concept of making a card into a ticket. I thought it was genius. I still do, actually.

The card even had perforations like a ticket. I thankfully resisted the temptation of ripping the card to see if that was an illusion too. It even has a bar code at the top of the card. It's cards like this that made me gradually creep back into full-time collecting.

Sadly, I may never see cards like this again. I don't think that Upper Deck wants the Fleer name out there that much. They may be embarrassed about the shoddy reputation Fleer had in the eighties and early nineties. I think that all Upper Deck really wanted were the designs to thrust upon us. That's a shame.

We will never see a Fleer Authentix card again. I'm happy that it's one less set to collect, but sad because it was daring enough to be different.
Posted by Steve Gierman at 9:21 PM