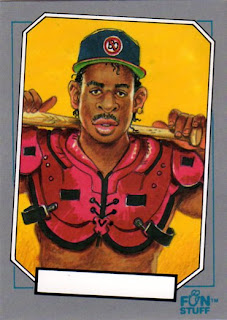 As I mentioned in another post, I buy a lot of repackaged cards. Before last December, I never saw or heard of these cards. Since then, I've gotten 4 packs of them which have netted me more than half the set. These have also been featured over the past few months on various blogs, including my own.

I got a pack the other day with this card in it.

For those of you who don't remember the early 1990s, this is Deion "Prime Time" Sanders. He was a two-sport man, playing both football and baseball.

Deion wasn't the first to do this. That honor goes to Bo Jackson. 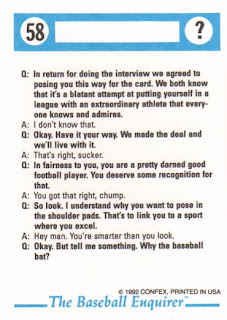 This card is a parody of a 1990 Score Bo Jackson card that, in its time, was notorious in the hobby. One thing that Bo and Deion had in common were egos. As in outsized egos. Maybe you need this to play two major sports at the same time. Bo appeared in a series of ads for Nike, called "Bo Knows". He'd appear in any number of sports or other settings. The first of the series set the tone with Bo appearing in a number of sports with stars from those sports saying "Bo knows...". At the end of the spot Bo attempts to play the guitar to which Bo Diddley says, "Bo, you don't know diddley."

This post turned out to be more about Bo Jackson then this National Enquirer card but I always like Bo better than Deion. 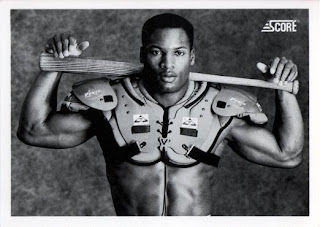 My question is, where did all these recent packs of The National Enquirer come from? Where have they been for the past 16 years that all of a sudden they seem to be everywhere?
Posted by capewood at 12:59 PM

Bo was not the first two sport player. There have been dozens going back to the 20's. See Jim Thorpe.

I guess I really meant the first guy to play professional baseball and football. The Braves had a pitcher (later with the Phillies), Ron Reed, who also played for the Pistons in '66 and '67.

Jim Thorpe played professional football and is actually in the NFL hall of fame. He also played the the reds and giants in the 20s and 30s.