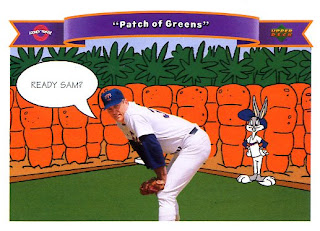 I like to buy repackaged baseball cards. For example, the Target near me sells these packages of cards distributed by The Fairfield Company. It's made of virtually indestructible clear plastic and contains 150 cards. You can usually see 6 of the cards in the package and they usually shuffle a few star players into view. The package I'm looking at now for example shows a 2004 Fleer Inscribed card of Andy Pettitte as an Astro. This year's Fairfield package is a bit different in that, in addition to individual cards there are also whole packs. I can see 2007 Topps Opening Day, 2003 Upper Deck First Pitch and I 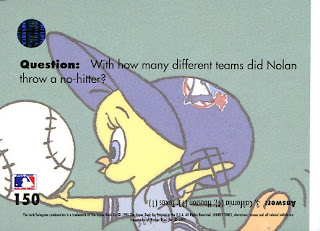 think there are 2 packs of 1989 Topps in there. I will admit that of the 150 cards in this package, I'll probably throw away more than half, maybe even 75%. Or perhaps I'll start making a Menger Sponge out of them.

But sometimes you get a real gem. I don't know exactly where I got this Nolan Ryan card but isn't it great (although the giant carrots are a bit scary)? According to the 2007 Sport Collector Digest Baseball Card Catalog, the set has 198 cards and features 18-card sequences which tell a baseball story. I only have this one card. The story, of course, must be "Field of Dreams".

And on the back, a trivia question!
Posted by capewood at 5:14 PM