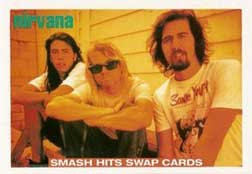 This is a card that was issued in Australia. That is all I know about it. I wish I knew more, but I'm at a loss.

I can't believe that 14 years have passed by so quickly. It seems like last year when I was flying home from Dallas, Texas. In reality, it was 14 years ago today. I didn't find out the news of Kurt's "passing" right away.

I came home from visiting my grandparents in Texas just shortly after noon. I had managed to avoid any television in the airports. I did pick up a Rolling Stone at the Dallas/Ft. Worth airport and decided to do my next art project based on a photo of Kurt Cobain.

While I was in Texas, I passed on Nirvana's album, "Bleach" on April 5th and bought "The Worst Of Jefferson Airplane" instead. I was still a little miffed at Nirvana bowing out of Lollapalooza a week earlier. I figured that I had a second hand copy of "Bleach" anyway.

I even went to a used CD store that afternoon and bought the Nine Inch Nails album, "Pretty Hate Machine". It was the only NIN CD that I didn't have at that point. I spent almost an hour in the music store and I heard nothing about Kurt.

My mom got to the control before I did during dinner, so we watched what she wanted. It was one of the national Evening News programs. I can't remember if it was CBS or NBC, but that's when I found out. I just sat there, silent, finishing my dinner. I wasn't the biggest fan of Nirvana, but it was the end of my musical innocence.

I thought I had prepared myself for things like this. I grew up listening to The Doors, Janis Joplin, Jimi Hendrix, The Blues Brothers and The Beatles. I knew about young loss. I was just a month and a half into age 5, when John Lennon died. My parents kept me from hearing about John Belushi until I somehow knew.

This was my first experience where I was smack dab in the middle of everything. I was a fan right when it happened and old enough to completely comprehend everything that it meant.

I took refuge in my friends, music and baseball. I was graduating high school. Music was always there, yet it took on a whole different meaning. My friends came and went over the next two years. Baseball would betray me a few months after this day in 1994. It was a whole new world.
Posted by Steve Gierman at 2:21 AM