So what's the big deal? It looks like a 1992 Cal Ripken, Jr. Topps cards. But it's really a 1992 Topps Micro card. The same in every way as the regular Topps issue except that the card is about the size of a postage stamp. I believe that I originally saw these in Toys R Us. And since I'll buy just about anything that says baseball cards on it, I bought a box. I have no idea what I paid for them.

Topps produced these sets in '91, '92 and '93. I don't think they were ever very popular. Unopened boxes are being offered on eBay right now for $0.99 plus shipping with no takers.

1992 was the first year that Topps produced gold parallel cards. These cards had a gold foil overlay with the players name. The 1992 micro set came with 12 gold cards. They had gold foil on the card background. I scanned these cards a few years ago and must have scanned them at different resolution. That would explain their different relative sizes. They are actually the same size. 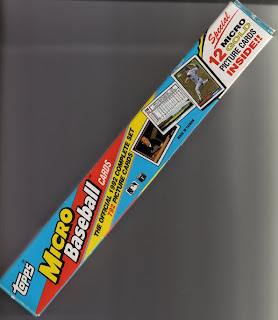 Right from the beginning I had a hard time deciding what do to with these cards. I left them in the box for a long time. I put some of the gold cards up for sale on eBay in 1999 and actually got $1.50 for the Nolan Ryan and $3.00 for the Griffey Jr. Right now on eBay you can buy a PSA graded copy of the Ryan card for $30. I may be a sucker for baseball cards, but not that much of a sucker.

Last year I finally pulled out the cards of the players I collect and put them in album sleeves along with the full sized card. The micro card looks kind of cute nestled up against it's big brother card. I left the rest in the box. At least it doesn't take up too much room.
Posted by capewood at 10:13 PM

very informative post. thanks for the info! still not sure what to do with mine yet.

I was wondering about these after I found them locked away in my safe, trying to find space. I guess they were taking up valuable 'real estate' unnecessarily. Oh, well. Maybe in 25 more years, they'll be worth 100bucks, of course so will a loaf of bread.